Talk of issues at Cafe 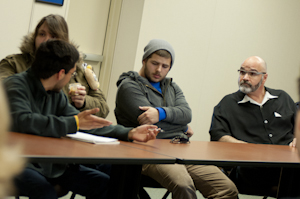 The Gadfly Café is open this semester with new hot button issues.

Every semester The Levan Center for Humanities hosts three Gadfly Café discussions, moderated by philosophy professor Rene Trujillo, about topics that people may feel strongly about.

Trujillo explains what the discussions will cover this year.

“We’re going to be doing gun control this year, we’re going to be talking about the idea of god and whether it’s a manmade creation or whether god created man,” he said.

“We try to bring up things that hopefully resonate with the community and that people have something to say about, something to share about and that perhaps there wasn’t another avenue to do it on campus,” said Trujillo.

The Gadfly Café started when Trujillo, a professor on campus, wanted to open up discussions amongst people on campus.

Trujillo said, “I came to Jack Hernandez, who is the director of the Levan Center, with an idea about two years ago that it would be nice to develop a format where faculty, staff and students could interact, so this is open to everyone on campus and in fact, also, other people that are connected to campus for a variety of different reasons.”

The conversations are informal so people can come and go in case they have a class or need to leave.  “It’s intended to be informal, these aren’t lectures.”

The topics discussed at Gadfly Café are topics that come from campus. “Jack Hernandez and I always begin before each semester talking about the ideas that we’ve heard come up in different forums around campus.

“I also at the beginning of each talk get my email out and encourage all the participants to give me ideas for further talks.”

A BC student that had attended previous discussions submitted the discussion topic this semester on whether god created man or man created god.