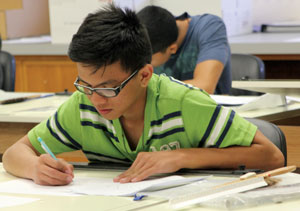 High school juniors and seniors had a preview of Bakersfield College’s Industrial Technology programs during The Second Annual Drafting CAD Competition on March 1.

One of the students who participated in the event was Mckenna Kitsch. Kitsch, a junior at Centennial High School, competed in the Architectural Hand Drawing area. She attended the event because she aspired to be an architect. She prepared herself for the competition and for her desired career path by taking a class called Drafting 1 from Centennial’s Industrial Technology department.

Of what she wanted to get from the event, she said, “[I hope to increase] my knowledge on where I need to be by the time I apply to college.”

Similarly, Norma Felix, a senior at Arvin High School, had taken classes geared toward her career interest, engineering. She said that she plans to study chemical engineering at a four-year college after high school.

“[I want] to get more knowledge on career pathways,” she added.

“They should learn a little bit of confidence, self-esteem and…how to interact with other students from other schools. And [they should learn] a little bit about the college environment because they had never seen classrooms like this,” he said. “Hopefully, this will lead to greater interest in college education.”

BC professor Darren Willis coordinated the event. Through the event, he intended to introduce and clarify different career pathways to the students. Willis, who previously worked for a high school district, understood that many high school students do not have clear plans beyond graduation.

“[For] a lot of young people, your goal is to get out of high school. You’re not thinking about what you want to do after that, and I think the only thing you pick up while you’re in high school is someone keeps yelling at you, ‘You have to go to college.’ And you don’t know why. You don’t know what you even want to do, really,” he said. “That’s just the next step, and a lot of people get lost in the shuffle. They drift from one thing to another before you know it you have a 100 units in the JC system.”

Beyond the competition, students also attended an informational session about BC’s Industrial Drawing, Architecture and Engineering certificates, degrees, and programs. Willis wanted students to consider BC as an option.

“We were trying to make some connections with the high schools that have industrial drawing programs. We thought it would be good for the students to come up to the site and then see some of the faculty and what happens up here,” he said. “[We wanted to] let them know that coming to BC is not a second choice.”

After correcting what he called “a few bumps last year,” he believed that this year’s event was a success.

“In our first year, the problems that we gave to the students were a little hard to finish in the allotted time, so we tried to scale back on the overall size of the project and focus on the quality aspect that they had to produce,” he said.

“The instructors have all emailed me, telling me that the kids enjoyed it, they had a great time…that it was a good event,” he added. “They hoped to have another one next year.”

After promoting the event to East High School students, he found that there were more students from East attending the event than any other participating high school.

“For the next year, I want to go out and publicize it to the schools that didn’t participate,” he said. “I need to market it better next year and actually visit the sites.”