BC host a day of engineering 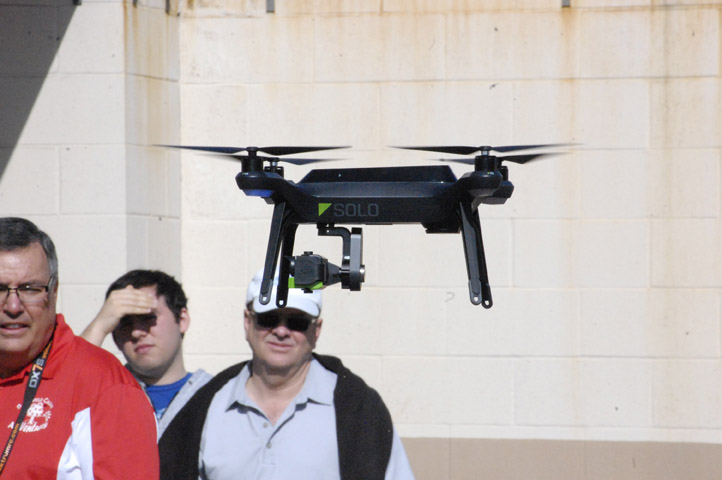 The Bakersfield College Panorama Campus is usually almost eerily empty on Fridays, except when there is something very special going on like what happened last week on Feb. 26. They called it Engineering Day, and it was the first time it has ever been held at BC.

Starting at about 7 a.m., a host of unfamiliar figures dressed alternately in formal wear, like suits and khakis, or blue jumpsuits somewhat reminiscent something a Star Trek character might wear, began to arrive on campus with all manner of equipment in tow.

These strangers proceeded to arrange a small expo of sorts for the deluge of high school age kids from all over Kern County who would soon converge on BC.

They were coming to see drones flown by the electrical engineering department and hot rods built at the auto shop. From the look of things, no expense was spared in putting on a show on for the kids. There was even an exhibit from Edwards AFB which simulated – accurately – the flight characteristics of an F-22 Raptor, the current pinnacle of American supersonic jet fighter technology.

Jack Earl, 55, a private contractor working as an engineer at Edwards AFB, relished pointing out that the whole simulator rig they had built for this event was put together using commonly available consumer products that anyone anywhere could obtain.

It seems that flying an F-22 is almost literally child’s play. Earl said that landing is actually the hard part and that it separates the real pilots from the black marks on the tarmac.

Earl had a disarming disposition, with a passionate edge and a very sharp wit as well.

He talked about why engineering was important enough to warrant an expo on campus with free food.

“[I came to BC today] to try to help inspire younger people to pursue a career in engineering. I think engineering is important because I think it’s very important to pursue what one loves doing, and in there, one has to lay out that you want to make a good living. And so one of the reasons that drove me to engineering was that I like fixing things. I like mechanical things, and when I researched the market, there’s jobs! There aren’t enough engineers. They need engineers, and I believe in getting out with an outreach like this to try to help inspire people, ‘cause no one did that when I was growing up. I didn’t know I could be an engineer!” he said.

After groups of 30 or so students had spent more than four hours circulating between the IT building and the two other buildings associated with the Science Technology Engineering and Mathematics Program, there was a lull in activity as word spread amongst the teenagers that lunch was ready.

Jason Dixon, 42, BC’s chair for the Engineering and Industrial Technology department, was on hand to assist in any way he could as his subordinates gave presentation after presentation with extra presentations on the side.

Many of the students in attendance were participants in local academic programs called Career Academies.

Career Academies are similar to having a separate trade school institution cohabitating with high school.

Squads of Kern County probation officers were an ever-present detail throughout the day. “Those officers are escorting a group of students from … one of the juvenile detention facilities here in Kern County,” Dixon said. “They want the students to learn about engineering programs here so that they can make better choices once they are done with their program,”

Dixon is passionate about reaching out to potential students who often are not aware of the opportunities presented by earning an engineering degree from BC.

“We are reaching out to the community. We’re letting the instructors come up here. They learn about our programs to tell their students. The students come up here, learn about the programs that feed into the engineering industry as well as other technical fields, and potentially come to BC and they can tell their friends about what they learned about here at BC. Most of them knew that BC had science and engineering, but most of them did not know about the technical programs: the automotive, the welding, the industrial drawing or the electronics,” said Dixon.

Engineering Day is new to BC, but the event has a 16-year history, which makes its arrival here on our campus feel like the natural progression of a long saga.

Engineering Day began as part of a program enacted by the Clinton administration during its education initiative. At that time it was located at the Kern County Museum, where it remained for 10 years until the museum began to charge a fee for the space. Unable to retask the necessary funds, the event’s organizers chose to accept an offer from CSUB to hold the event on that university campus.

Andrea Wright, a consultant for Kern County Superintendent of Schools, took some time to explain the intricacies of developing Engineering Day into its present form.

“[W]e have been there for three or four years, and this year they started to charge us, and when you don’t have that kind of money for education… So then BC opened the door and said ‘come’,” said Wright. “We average about 500 students through all the high schools and our surrounding areas. We try to give this to those students that are interested in this career path, but we also want to introduce it to those other students that are not sure