The Renegade Pulse was a success 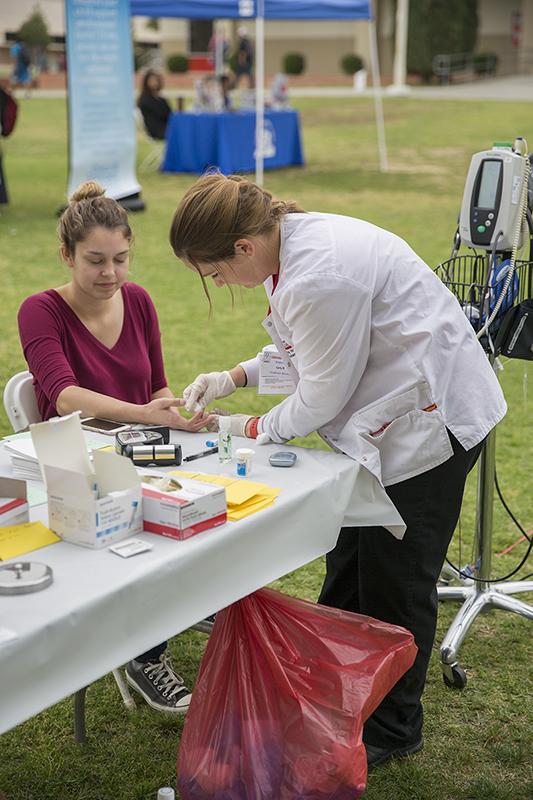 Despite dreary and rainy weather negatively impacting the overall turnout for the Renegade Pulse, organizers and volunteers alike still felt it was an overall success.

The Renegade Pulse is a health fair on the Bakersfield College campus that took place on April 13 from 8 a.m. to 1 p.m. There were many different kinds of vendors set up for attendees to visit for free health screenings and tests.

Olivia Gurrero, 23, was one such attendee who happened upon the health fair by chance when she walked by and decided to check it out. She stopped by at least one vendor to have her blood tested, and was pleased with her overall experience.

Jessica Rivera, 37, was one of the volunteers who worked at the blood pressure booth, and felt that the entire event was worth the effort. “I think the turnout was pretty good. I had a lot of people coming to get their blood pressure checked,” she said.

“I think that the weather wasn’t too nice since it was sprinkling, and because of that, the turnout was a little less than anticipated. It was still good.”

She went on to say, “It’s my opinion that as long as you help at least one person, the entire thing was worth it.”

Sandy Davis, 47, is Rivera’s nursing instructor, and was asked to help with the event. She helped with the fair last year so she agreed to get involved again this year. She said that there were a few more attendees last year, and felt that the weather affected the overall turnout. Despite the lower turnout, she was pleased with how things went and plans on getting involved once more next year.

Raymond Purcell, the director of Student Health and Wellness Services, managed the entire event. He is new to this position and it was the first health fair he managed.

Purcell had help from Nurse Deborah B. Strong, the fair’s originator, as well as Stella Ponce, who worked on last year’s fair.

Purcell feels that the event was a success despite the lower-than-anticipated attendance. “I was pleased with the turnout. In surveying and personally speaking to the vendors, they felt that their time was well spent and all indicated interest in participating next year,” he said.

“Of course I would have liked greater attendance because there were so many services and programs represented which elevate the health and wellness of the community and the campus. But, that’s the reason that, as a team, we’ll meet again to assess our strengths and weaknesses so that we can plan more effectively for next year.”

Purcell said he and the department are conducting the National College Health Assessment in the Fall of 2016. The survey will be a campus report card, and will establish a baseline of campus health, which allows comparisons to be made with other community college campuses. This will also contribute to their three-year strategic plan and provide an ongoing measure of program effectiveness.