BC parking flows to streets 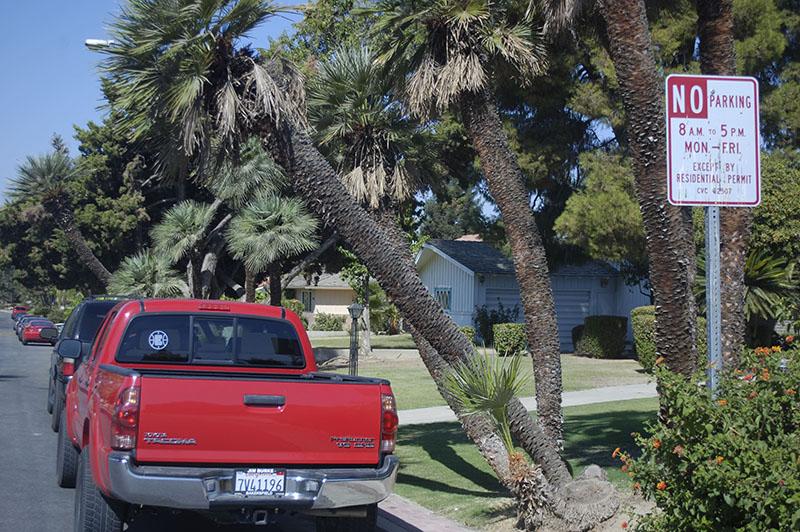 With two sides of Bakersfield College bordered by residential areas, one thing is for certain at the beginning of a school year: There will be parking issues.

During the spring and fall semesters, the parking lots settle with hundreds of cars filled with students desperate to get to class on time and sometimes parking spots are difficult to find.

Due to this and the fact that some students don’t buy the annual parking permit, students are finding it easier to park in these neighborhoods that are adjacent to BC.

Certainly, some of the residents are not happy about this parking situation, because the neighborhoods have retaliated with no parking signs, but this is not stopping students from using the neighborhood as a personal parking spot.

Some of the neighbors on the block nearest to BC were pretty sympathetic to the situation concerning parking.

Terry Meyer, one of the residents, and also a teacher at BC, said, “Most people don’t understand what students are going through, or the reason why they aren’t parking in the parking lot. Parking permits cost a ton of money for students and students are already struggling to buy their books, so they have to park on the street instead of the parking lot.” Meyer doesn’t mind having students park close to her house.

Another resident, Rick Frias, said, “When you live next to a big college like this, you’ve gotta expect that you’re going to get a bunch of cars parking in front of your house every day, so I don’t mind it. But it just gets irritating to have to plan when you’re going to leave the driveway in the morning, because it’s impossible to leave when all the students are coming to school. It’s the same way when they are all leaving, but I always plan before I leave my house.”

Another resident, Bill Trout, was walking his dog and said that he lived toward the back of the neighborhood and it was only sometimes that cars ever reach his house, but when they do he doesn’t like it.

“Students shouldn’t leave their cars in a neighborhood all alone if they don’t live there. It’s not smart, but it doesn’t really bother me, because it’s not all the time,” said Trout.

Evelin Valencia, a BC student, parked right next to someone’s driveway. She took her time and she seemed nervous getting out of the car as she exclaimed, “You just witnessed some of the worst parking ever in the history of mankind!”

Valencia is a mother and a nursing major, and she said that budgeting while going to school can be very difficult.

Valencia discussed why she chooses to park on the side of the school rather than the parking lot.

She said, “I feel like it’s too expensive to pay for a parking permit. I only come here once a week, and I don’t want to pay for parking, something that I don’t need every day.”