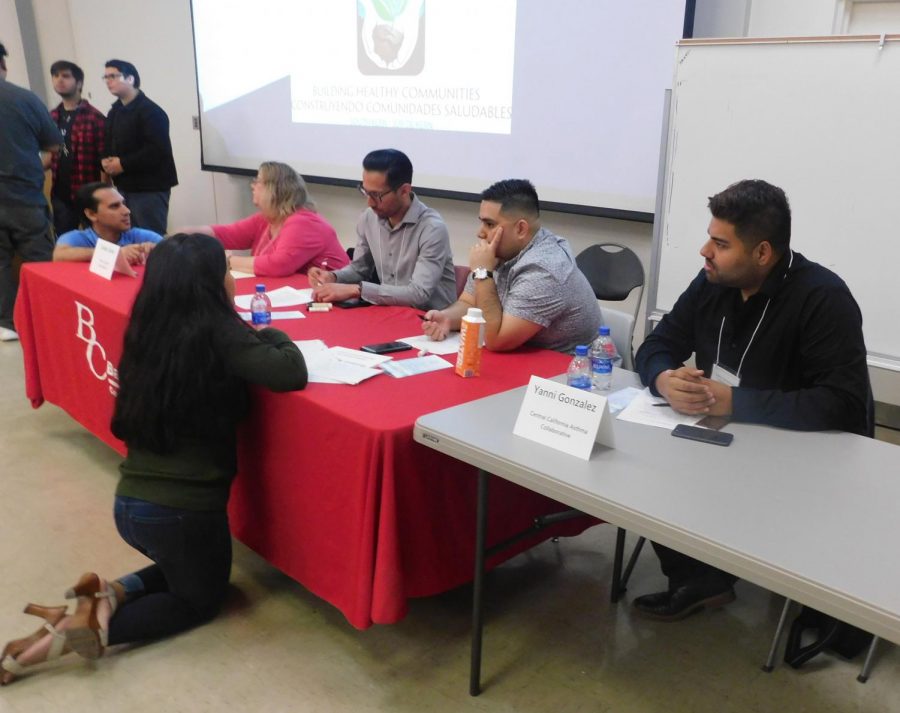 Some of the presenters for the workshop getting ready to start informing the teams about air pollution.

The second annual Health and Social Justice Hackathon took place at Bakersfield College on April 12-14 and organizers of the event were BC Professors Edward Rangel, computer science, and Sarah Baron, Public Health Science. The three-day long competition is mainly for BC students to come together as a group and build technology wise tools that can be used by the community.

The participating teams were to show to the judges a technical prototype and also a group presentation explaining what their project was about. The main goal of this event was to deliver more awareness on public health.

The event began with a Preliminary Panel Session on Thursday from 3:30 to 4:30 p.m at Forum 102. At the session, the presenters covered several subjects such as public health, pollution and mental health stigma and awareness. Some of the members of the panel for that day were Sandy Woo from Kern Coalition Against Human Trafficking, Christy Leyvas Medical Investigator for the Kern County Public Health Services Department, Genevieve Gale from the Central Valley Air Quality Coalition, among others.

On day two of the competition, there were two workshops at Forum 102 and B5 respectively from 1-2 p.m. The moderator for the workshop inside Forum 102 was Carlos Bello, Kern Family Healthcare. Linda Urata, Reginal Planner, Kern Council of Governments was there to mainly discussed of air pollution in Kern County.

Urata explained that the Kern Council of Governments has worked on things like health awareness for indoor and outdoor pollution that can decrease someone’s own health. Urata also explained that one of the pollutants inside one’s own house can be the constant use of a fireplace. She also said that the most common pollutant outdoors are vehicles and other sources.

Urata explained that it is important to reduce traffic congestion because that can be another source of pollution, and gave the advice to take the bus, ride a bike or carpool with friends.

Gustavo Aguirre, Jr., Kern County Coordinator, Central California Environmental Justice Network was there to also give important information about the air pollution. Aguirre shared the five air quality levels. Level one is when individuals have no restriction to being outside their houses. Level two is considering reducing some outdoor activities because there is somewhat pollution outside. Level three advices individuals that they need to exercise indoors and not outdoors. Level four is when there is more pollution outside and everyone needs to stay more inside the house. Finally, level five is staying inside the house and avoiding all outdoors activities.

Day three of the Health and Social Justice Hackathon was for all the participating teams. All the teams were to present their prototype to the judges and also deliver their presentation on how their project could help the community. After each member had presented their prototype and had given their presentations about it, the judges were to come up with the winner for the Hackathon. The winners were announced as follows: