M.E.Ch.A and SGA organize a memorial for Jesus Nieto 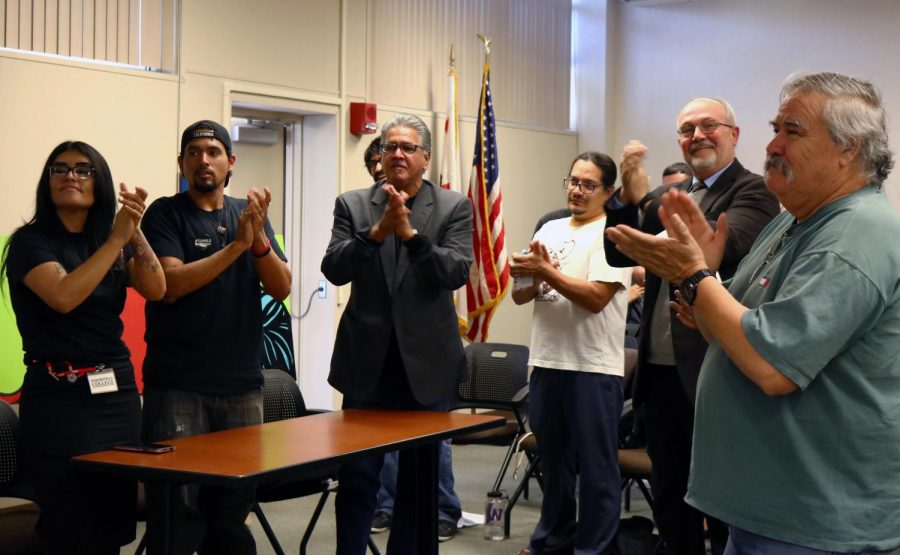 During the memorial conference honoring Nieto, the audience stands up and cheers.

In honor of the late Jesus “Jess” Gilberto Nieto, who passed away on September 21, 2017 at 70 years old, BC student organization M.E.Ch.A and SGA organized a memorial conference to remember Nieto and his accomplishments as a member of the Bakersfield community and Bakersfield College.

A Bakersfield College alumnus and pioneer of Chicano studies at BC, Nieto taught the first Chicano History course in the fall of 1971. He also oversaw the development of over a dozen Chicano related courses in 1974 and institutionalized the Chicano Cultural Center at Bakersfield College. He also acted as the advisor of the United Mexican Students club and organized a trip to Mexico for 15 student from BC to study as a part of the project M.E.C.H.I.C.A.

Before his passing in 2016, BC President Sonya Christian recognized Nieto for his contributions to BC and was inducted into the BCSD Hall of Fame.

Members of M.E.Ch.A, the BC student body, and faculty were invited to honor and remember Nieto. Among the speakers and invited guests at the memorial conference were former and current M.E.Ch.A members, as well as BC faculty. The memorial conference ended with a talk on the book “Starving for Justice” with its author from UC Santa Barbra.

Dean Cornelio Rodriquez opened the panel with a welcoming address, as he recognized faculty members involved in Chicano Studies at BC and commented on the “then and now” at Bakersfield College.

“It’s not easy being Chicano or Chicana,” shared Rodriquez as he spoke about his own personal experiences as a child, “we are all here today because it’s still not easy begin Chicano or Chicana.” He continued by commenting on Nieto’s accomplishments and contributions which paved the way for BC today.

The memorial conference continued with the introduction of current and former M.E.Ch.A members and a panel discussion, where both generations discussed current and past issues.

During the panel which took a portion of the conference each of the panelist brought up issues, both past, persisting and current, that Chicanos everywhere were facing. Manos spoke of the importance of having a voice for students on campus and how impactful being recognized can be.

“Today M.E.Ch.A is recognized among the students at BC as a highly involved organization and we hope to bring that representation from BC to the community” said Manos.

“We can disrupt the pipeline of institutions with the power of knowledge, and with Chicano studies especially one can learn where they came from and who they are.”

Of the M.E.Ch.A founders, Rivera talked about Nieto and the influence he had on her and many other.

“Nieto taught us and remined us to always be inclusive” said Rivera. She continued by acknowledging the many issues facing today’s generation before encouraging the room to stand up and chant together in honor of Nieto.

Rivera and the panelists along with many in the crowd began chanting, “Se viva Jess! Se viva M.E.Ch.A!”

Shortly after the discussion, faculty shared current projects on Chicano studies from the activism of Nieto in the 1980s to 2017, to the history of the United Farm Workers and even Chicano history in Bakersfield.

The panel came to a close with a discussion on the book, “Starving for Justice: Hunger Strikes, Spectacular Speech, and the Struggle for Dignity,” with UC Santa Barbara Chicano studies professor Ralph Armbruster-Sandoval.