Matthew Garrett’s “A Tale of Two Protests”: The Line Between Free Speech and Hate Speech 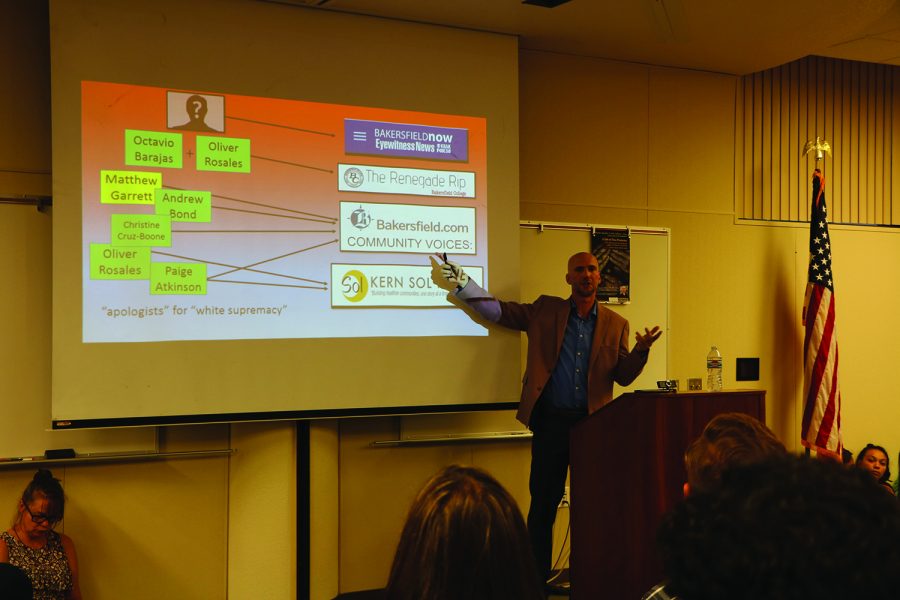 Professor Matthew Garrett describing the timeline of news stories published about the controversy over the stickers around campus.

The right to free speech is included in the First Amendment, but the line between free speech and hate speech can often become blurred leaving people to question what separates the two.

Matthew Garrett, professor of history at BC, spoke about free speech to a packed room with standing room only on Sept. 12, in the Levan Center. The speech, “A Tale of Two Protests: Free Speech and the Intellectual Origins of Campus Censorship,” is in response to an incident that occurred on the BC campus at the tail-end of the spring 2019 semester.

In May, stickers were posted on the campus with phrases that have been in a debate on whether or not they are seen as hate speech. Some stickers were hung over posters advertising a Chicano studies conference. Multiple articles were published in local news outlets, such as the Bakersfield Californian, South Kern Sol, and the local news stations, by professors, students, and community members voicing their opinions.

The school sent a mass email to students labeling the incident as “vandalism.” Further, they stated that “Bakersfield College treats these matters to the fullest extent of the law and our student code of conduct,” according to the email sent to students by Nicky Damania, director of Student Life.

Garrett’s stance is that these stickers exercised people’s right to free speech. He spoke about the three key factors to determine why BC responded to the stickers in the actions that were taken. These factors, which served as his thesis of the night, include intellectual biases, logical fallacies, and emotional reasoning.

“If you use bad logic, you’re likely to have a bad answer,” Garrett said.

The stickers that were put up on campus are linked to the organization Hundred-Handers. This organization has been characterized as a white supremacist group by many, but Garrett challenged the people in attendance to look at the group from the opposite way. He stated that they “definitely seem conservative,” but to conclude that they are racist would be out context with the content that was shown.

“Can we openly discuss it, and without assuming that anyone who doesn’t agree is a racist,” asked Garrett.

Garrett then applied the same logical fallacy that he analyzed the Hundred-Handers with to a group on campus, MEChA. He stated that “MEChA has the most racist and disgusting documents on campus.”

Garrett then followed that statement with his belief that the students of MEChA are not racist and thinks that they are great students.

Rosa Garza, professor of history, raised the awareness that the MEChA documents referred to were from 1969 when there was a state of upheaval.

“I went through it; we were very angry and that is what came out of it. It is the history of MEChA, it’s not what MEChA members are today,” Garza said. “We have all evolved, we have all learned from each other.”

Professor Erin Miller responded to Garza’s statement of the 1969 MEChA documents with her acknowledgment of the historical context of when the documents were drafted. Miller then stated that the documents had not been changed until months ago before handing the floor back to Garrett.

On reference to the “Chicago Principles,” Garrett mentioned that the University of Chicago created these principles to expand the freedom of speech and expression for their students. These guidelines encourage students to debate their opinions about words said and to learn for themselves if they are considered racist or offensive.

Editor’s Note: Vandalism is not protected by the First Amendment as free speech. Defacing or damaging school property, such as placing hard to remove stickers on The Renegade Rip kiosks, is vandalism.