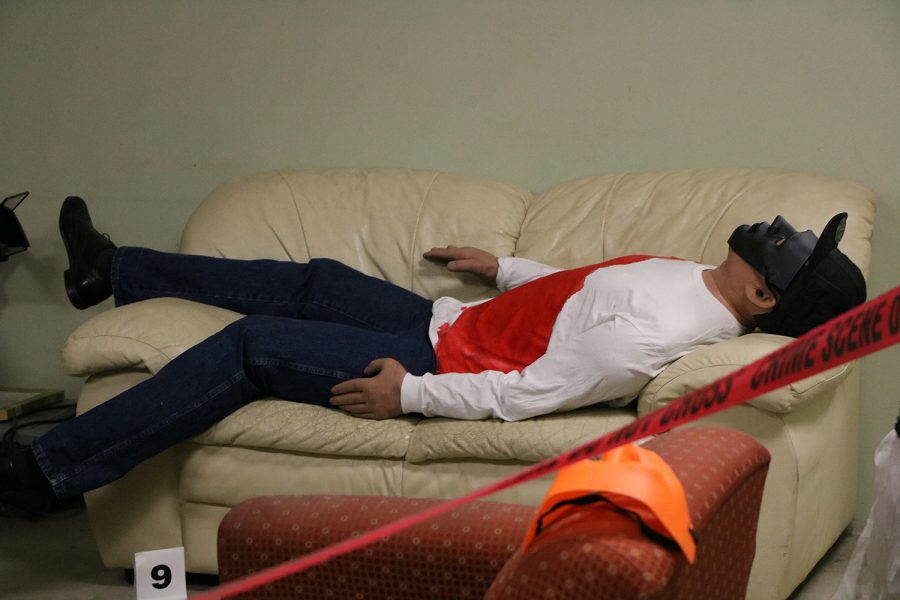 The mannequin lays on the couch behind the red tape for a Halloween party gone wrong during a crime lab for Forensic class.

Bakersfield College Forensics Professor Pat Smith and students worked on a mock Halloween crime scene in the Language Arts Building basement during the fall semester. The forensic evidence class gives students the opportunity to learn what forensic evidence is and how it’s used in the court system.

The mock crime scene was set up so BC forensics students can learn how to take evidence and to link it back to the suspect.

“In forensics, the evidence that we don’t see like a fingerprint, footprints, or semen, we […] use a type of chemical to bring [it] out,” Smith said.

A dummy was set out, laying on the couch in blood along with a bullet casing nearby on the ground. Alcohol, candies, computers, and Halloween decorations were spread out around the taped off area.

The class was split into teams of five students each, with individual playing a different part in order to seem like a real investigation team. The team leader took the part of the lead investigator who was in charge of the crime scene. Along with the lead, there was a photographer who took photos of the taped off area and the marked area, a sketch artist who drew the scene and the suspect may look like, a technician that dusted for fingerprints and other evidence, and a victim who was questioned on what happened at the crime scene.

“This mock scene was different from the others. It was a Halloween party that went wrong, with [the chance] to find fingerprints, hair samples, and other things to find the suspects,” BC student, Elizabeth Gomez said.

Each team was sent down one at a time and given a specific amount of time to find the evidence. The teams worked on the crime scene thoroughly to find more evidence to help them get closer to finding the suspect they needed to catch.