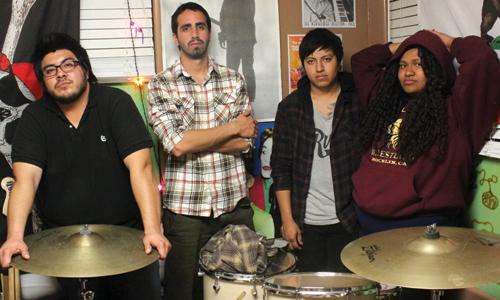 Holy Beast, a local band from Bakersfield, plays a unique a blend of soul, punk and R&B built on the special chemistry that they all share.

Alejandro Tuesta, the drummer; Chanell Hall, the lead singer; Edy Hernandez, the guitarist; and Carlos Contreras, the bassist; all met by answering a Craigslist advertisement. So although they met by random, the members of Holy Beast feel a sense of fate in them coming together and creating their music.

“It’s the craziest thing,” Hall said. “My life as a story has been manifested in this band. I’ll read poetry that Alejandro wrote years ago and think that reminds me of what I was thinking when I was 17. It happens. Somehow, somewhere or another our lives prepped us to meet and do something with that meeting.”

Both Hernandez and Tuesta feel similarly fated to find people that understand them.

“I feel lucky to have met them right now, we could be anywhere on this planet, to have the ability to play what we hear and to have the creativity and the weirdness, to bring that out of you. Also to keep it together as a band this long, I feel so lucky to have gotten through the hardships and everything,” he said.

“With them I don’t even care if we don’t go anywhere. I know that regardless of what happens economically or if we make a career, we’ll still be able to write whatever we want, because I already know in my body and mind that their creative outlet is never going to end. They’re the kind of people that will always go and give me so much energy to keep learning things and still play drums after all these years.”

This sense of challenge, of  pushing each other into something they love, is a strong feeling in the band.

“I think we find enjoyment in the band room, in seeing frustration in other faces, like when I see Edy excited, when he’s trying to figure something out. I think that’s the ultimate goal. We challenge each other just because that is what comes out. I want to bring out the full potential of my instrument and my abilities,” said bassist Contreras.

“Being in this band, seeing everyone who is beyond up to par, that’s the thing I’ve never experienced before. I’ve played with professional musicians, they never challenge me like this. This what I come to practice for.”

Hall feels that over the years they have developed a unique musical sense from their chemistry.

As she plays music with them, Hall gets specific feelings from each of the other members of Holy Beast.

“When Alejandro plays the drums I feel it in my body as a twitch. It’s about being in between some of the timing that he keeps. It’s awakening something. With Edy on his guitar, he plays weird melodies, it reminds me of the ocean breeze. It grabs you. You feel your spirit fluttering.

“The tapping on the bass is really beautiful. It brings it together and makes it palatable for the person with the least experience in life, or with music in general.”

Tuesta feels that there is weirdness to their music.

“I listen to standard stuff, but there’s another side of me that likes the weird stuff. I can no longer play normal stuff because it has all gotten so weird, and our new stuff just keeps going crazier and crazier. We keep learning and experimenting with all these weird patterns and polyrhythms because it all compliments and we have this vision right now.”

Hall wants this weirdness to speak to the many people out there that feel different and misunderstood.

“I feel like everybody is really weird and not everyone has a chance to feel together in their weirdness. There are a lot of people in this world who are just like ‘man nobody gets me.’ I want to play and perform music for those people out there who feel that no one gets them and I want them to be able to listen to our music and transcend that.”