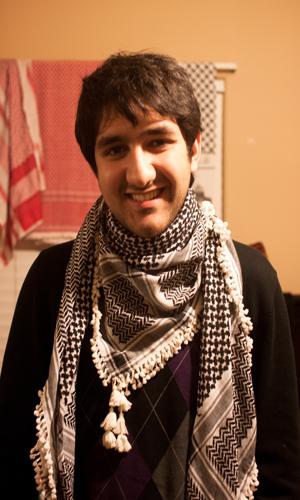 Protesting, murder, attacks on innocent people and genocide. These are things Americans hear about on a daily basis, the majority coming from a foreign country.

Bakersfield College international relations major Mohammad Hammad has experienced some of these events first hand in his family’s home country of Palestine. Hammad’s parents were both born in Jerusalem, but are no longer allowed back in due to conflict between Israel and Palestine. Hammad’s father migrated to the United States in the ’70s to work, and his mother came in the ’80s.

Hammad has been visiting Palestine since he was born.

“I even had my first birthday there,” said Hammad on his visits to Palestine.

Since then he has been visiting every summer. He also lived there from 2005–06. Being a frequent visitor to Palestine, Hammad has been a part of the conflict between Israel and Palestine.

During the Palestinian uprising in 2000, Hammad was only 8 years old. Israeli troops invaded a sacred section of Jerusalem, causing tension to spread like wildfire. On the streets, civilians would throw rocks and bottles at Israeli troops as they passed by the streets. Israeli soldiers would respond with live ammunition, and their “Break the Bones” policy, where they try to shatter the elbows of those they oppose.

Hammad recalled seeing this policy inflicted on one of his friends. After throwing rocks at a Jeep, Hammad and his friends were tear-gassed, and one of them ended up getting caught and had his elbow shattered in front of everyone.

“That was a pretty eye-opening moment, because here it was happening to one of our friends,” said Hammad.

During that same stay in Ramallah, Hammad and his father parted ways to do errands. This was the same time that Israelis positioned snipers on Ramallah and shot random passers-by.

“The first thing I remember seeing was a guy screaming and holding on to his arm, I wasn’t sure if it was shot or hurt from a grenade. His hand was detached from the wrist.

“I didn’t know what to do, so I just started running with the crowd in their direction as the [Israel Defense Force] opened fire on people. And then you look back and see people shot lying on the ground dead in front of you. I know I say this a lot, but I was only 8 years old and I was scared,” said Hammad.

In January of 2012, Hammad experienced another conflict with Israeli troops on his way back home. While standing in line at the last checkpoint, he was approached and pulled away by security.

Hammad was questioned for six hours about his stay in Palestine, if he was involved in resistance groups, and even if he was in a relationship. After a few hours, the security left and came back with a laptop showing Hammad’s Facebook and his personal blog.

“At this point, I found it creepy that they found it that quickly, but things like that happen all the time,” said Hammad on the situation.

“They asked me why I do this, and if I was going to stop. I told them no and that I would probably record what is happening right now,” said Hammad on his interrogation.

Hammad was then asked for his password to the blog, to which he refused. Eventually, he was let go, but his cell phone and camera memory card were wiped. Hammad also experienced another confrontation this past year when he went with friends out to eat. On the way home from Ramallah, they were stopped by a checkpoint. Hammad was unaware that the car they were in was an Israeli car, which is not to be driven by Palestinians.

“I’m sitting here cursing him [his friend] in my head, wondering why we are in this car,” said Hammad on driving to the checkpoint.  The main soldier had a scent of alcohol on his breath and proceeded to let Hammad and his male friend go, but they had to leave the two girls they were with.

After refusing and arguing, the soldier pulled out his M16 and pointed it directly at Hammad.

“At the time, I felt somewhat scared, but I was in the zone … who knows what a drunk soldier is going to do with two young girls,” said Hammad. Eventually the soldier put the gun down and they were let go.

Hammad elaborated on his experiences and reactions he gets when bringing them up.