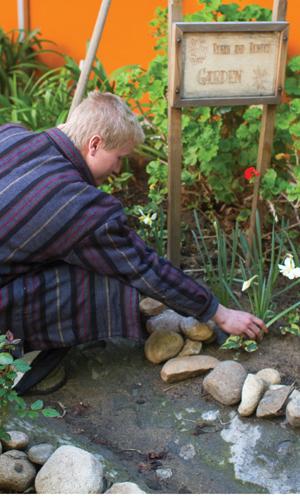 Three Bakersfield College students have taken it upon themselves to spruce up the campus one garden at a time starting with the Robin and Rondi’s Garden in the Fine Arts building.

Students James Gorman, a 20-year-old horticulture major, and Cameron Peoples, a 20- year-old forestry major and Jesus Rivera, a horticulture major, have taken it upon themselves to beautify a corner of the campus by utilizing the skills that they have learned at BC.

They discovered the garden last December and undertook the task of pruning back the overgrowth over winter break. “We talked about it and kept our word,” Rivera said.

“We emptied out four or five garbage cans full of overgrowth and started to turn the soil. Then we planted the bulbs. We weren’t sure how well they would do. That was three months ago, and they’re already flowering,” according to Rivera.

The students work on their breaks between classes and any free time that they have on campus.“We’re horticulture students, so we figured we might as well get our hands dirty,” said Rivera.

Most of the time the garden that sits like an oasis in the middle of the Fine Arts Building is locked.

The department assistant of fine and performing arts, Joyce Teague, allows them access for the extra-curricular project.

“Every time we come in on our breaks, they allow us access. It’s not a door that’s open all the time,” said Rivera.

The garden is able to be enjoyed by any one who takes the time to look in and see the greenery and splashes of vibrant flowers, but it’s “the staff that’s around here that really get to appreciate it because their offices are around here,” said Rivera.

The students are not getting any extra-credit from any of their classes to clean up the garden.

“It’s more of our desire to see things alive and put into practice what we’ve learned,” said Rivera. “Our labs are there, but it’s limited as to what we can do. There is so much green space on campus we might as well invest in it.”

Some of the things that the students have learned and are applying to their clean up of the garden are: how to read the soil and tend to it, the pruning of the plants, plant identification and general horticulture.

“A lot of areas could be a nicer place to be a part of,” Rivera said. The team is also on the lookout for more gardens or raised flowerbeds that could be cleaned up and turned into nice areas for students to spend their time. “It’s much nicer than sitting around a stump or a rock.”

The team has a real passion for the work that they do. “Each plant and each garden I work on, I try to put a little of myself into it,” said Gorman.

Soon the garden will have more color as more flowers bloom in the coming months.

“We got to get some color out there,” said Teague. “I’m a garden fanatic. I love it. I think it’s cool that students want to get involved in something like that.”