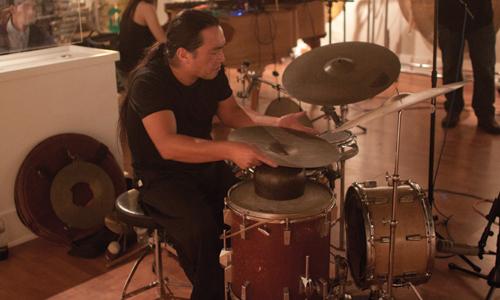 The Metro Gallery played host to a four-fold jazz show March 15 headlined by the Nakatani Gong Orchestra. The show was recorded for release on vinyl sometime in the near future.

The show was opened by a free jazz trio featuring Kris Tiner on trumpet, Motoko Honda sitting in for Jeremy Drake on the piano, and Tatsuya Nakatani playing percussion.

It was the first time the three played together.

The show was all improvised music and, according to Tiner, they didn’t even get much of a sound check.

Tiner was responsible for comprising the show. Tiner makes an attempt to get together and do a show with Nakatani every time that he comes through town. The Nakatani Gong Orchestra was in town last April, but Tiner didn’t get a chance to play a show with them.

“I wanted to do it again in this space because it’s so reverberant,” Tiner said of the Metro Gallery.

“It’s always a thrill working with Nakatani. He’s a master musician and brings a certain kind of magic and intensity.

“It makes it very special. It makes a unique, special moment for everybody,” said Tiner.

The show’s opener was the Bakersfield Astral Troupe, a local band known for playing at Dagny’s Coffee Shop downtown on Sunday mornings.

The main event of the show was the Nakatani Gong Orchestra, comprised of six local musicians and conducted by Nakatani.

“It was my first time ever holding a bow,” said Leah Lynn, the only female member of the orchestra and also a member of the Bakersfield Astral Troupe.

They only got training for two hours to learn all of the hand signals. The members of the orchestra both strike the gong and use a bow to play them much like a violin making a unique sound.

“I just loved it. It was beautiful,” said Lynn.

Lynn believes that  the Bakersfield music scene is underrated.

“Bakersfield has really good music. People just need to get out more and explore,” she said.