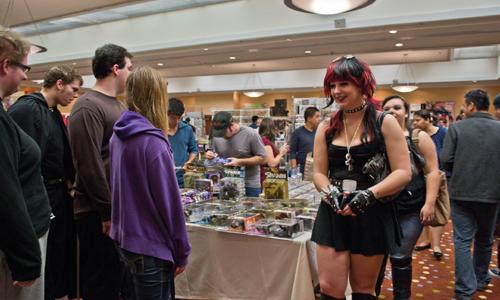 Nearly a year after the last convention, the Bakersfield Comic Convention was back at the DoubleTree Hotel for the fifth time. Attendees of all ages came to see the various comic vendors, artists and merchandise provided by the convention.  The fee was seven dollars to enter, but discounts were given to those dressed up in a costume.

Shelby Chapman, 11, a student from Bill Williams Elementary School went to the convention for the first time and dressed up as a character from “Vocaloids” named Len Kagamine. “It’s fun being here,” said Chapman.

Chapman stated that she learned about the convention through her friends but due to conflict in timing came to the convention with her family instead.

There were those who attended the convention as a professional deal, such as model/cosplayer, Ivy Doomkitty, 26.

“I go to all comic book conventions,” said Ivy.

Ivy stated that she is a friend of Steve Wyatt, the man who had set up the convention.  She said that the perks of the Bakersfield Comic Convention was that it was close to Los Angeles and also stated, “I really like the set-up of the show, a lot actually.”

While there were many vendors at the convention ranging from local game stores to local artists, there was a single small fan-made booth.  Amanda Moore, 21, had attended Bak-Anime in the summer but this convention was the first time for her to sell her own products.  Moore draws her own art and fan art and had made them into buttons, bookmarks and cell phone charms for her booth.

“The cartoony side of more comics,” is how she stated her art, “appeal to younger audiences more to get their attention.”  Moore also stated that her art is more colorful than most comics, which are more towards the bland side.  Moore hoped that in the future days of the conventions, there would be vendors who would vary themselves with products and not only limit themselves with “stacks of the same comics.” She also stated that she would like to see more vendors, such as herself, selling more fan-made products and art.

The convention also featured not only local, but famous comic artists.

Tone Rodriguez, 46, is best known for his work for Bongo Comics, which covers “The Simpsons” and “Futurama” comics.  Rodriguez has attended the Bakersfield Comic Convention since 2008, and as much as the attendance of the convention has increased since then, he hopes that in the future there would be more to come.

Steve Wyatt, the man who started the Bakersfield Comic Convention, stated that in the first year they had nearly 400 attendees and as the years went by it increased by hundreds until last year where they hit around 750 attendees. This year he has estimated that the convention has received around 900 attendees.  As much as Wyatt would like to make the convention bigger, he said that the town is not big enough to support a bigger convention than it already is.

“It’s doing great, has a steady flow of attendees,” stated Wyatt as the convention eventually came to an end.

It’s all about having fun.”