BC Homestuck fans speak of their fandom 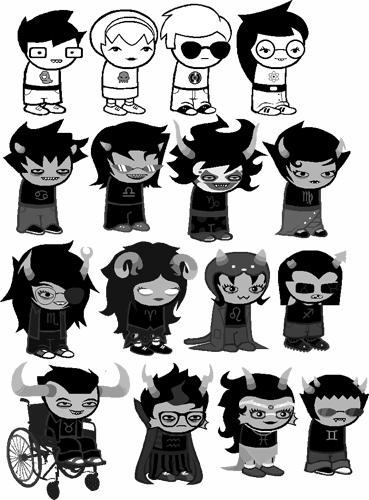 The author, Andrew Hussie, is currently known for his webcomic titled “Homestuck.” According to knowyourmeme.com, “Homestuck” ranks as No. 3 on the top 10 fandoms of 2012. Those within the fandom calls themselves “Homestucks,” and they range from the estimation of youngest being in their early teens to oldest of maybe 30s and older.

“A game that four kids play. Four kids. 13 years old. Two boys and two girls,” answered Molly Faiella, 19, a BC psychology major, when asked what “Homestuck” was, “and the game ends the world, and then they have to create a whole world.”

Faiella stated that she can relate to the webcomic due to the fact that there are over hundreds of characters in the comic itself.

“There’s a character in there who has anxiety, and I have anxiety, so I can relate to that,” explained Faiella, “and they’ll react the same way I would react, or they’ll get into situations that I’ve been in, and they would react the way I reacted.”

“I think it’s so big [Homestuck] because it’s so relatable.  There are so many characters that there are one or two you can relate to,” said Latrice Sebastian, 18, a BC computer science major. Sebastian only began reading the comic for just a little over a month now and found out about it through her friends.  She also stated that she likes how in depth-the comic is.

An example would be how a race called “Trolls” reproduces.  The comic goes to show that they have to use a bucket in order for the sexual reproduction to progress. The buckets are then picked up by droids to be taken to the Mother of Trolls so that they can produce a larvae which will later grow up to become a Troll.

Adam McInnes, 21, a BC computer science major, stated that he found out about “Homestuck” through the Internet and ended up investigating it.

He has read the comic for a little over a year now and stated that to him, the comic is as he quoted, “A young man standing in his bedroom.”

McInnes then said, “Four kids play a game and blow up the world…universe shenanigans, leprechauns, Cherubs, other aliens, all sorts of things — who even knows anymore!”

“’Homestuck’ is a really big webcomic that involves a group of kids, and they go on a really amazing journey and this awesome universe with Trolls and bunch of other things,” stated Alex Delgado, 19, a BC psychology major. ””It’s really addicting if you have time for it.”

Delgado stated that “Homestuck” is an interactive webcomic and that you can click on the pages and the readers can do all sorts of fun things. “it’s not like a regular webcomic, all the words are at the bottom and it’s really easy to follow but you have to pay attention to the little things because it comes up later, and it has a big meaning.”

She also went on to say that there are also games, mini movies, and gifs that you can watch and play while reading the comic.

Hussie likes to interact the comic with the readers by posting questions on the forums as to what a character should do or how the future storylines should be planned out.

As of date, Homestuck has uploaded over 6,000 pages.

On September 4, 2012, Hussie announced a Kickstarter in order to raise funds for a “Homestuck” video game. The game is planned to start its development this year, and is expected to be completed by 2014.

Some fans stated that Hussie didn’t expect so much, but reached his goal of $700,000 within 32 hours of announcement.

They then exceeded their goal by raising more than $2 million; this estimation excludes the donations it received through non-Paypal donations.

One person who donated $10,000 was a soldier who’s deployed in Afghanistan. He donated due to the fact that he said a Homestuck update was something he always looked forward to.

Instead of using the money for something for himself, the soldier decided that he would donate to the fandom he enjoys.

There were incidents where Homestucks got into trouble at conventions because the fandom’s size was too large and it started conflicts with other fandoms attending the event.

There were even incidents that happened between Homestucks such as one throwing a bucket at another’s head and supposedly causing a concussion. There are even times where the Homestucks receive death threats from other fandoms due to certain conflicts they face online, meets or at conventions.

As a fandom filled with massive variation of fans, Homestucks go far as to reaching out to those who aren’t also part of the fandom.

Last year, a charity project was started by a small group of Homestucks called The Can Town Project, which was formed in order to help local communities by distributing canned foods collected by those who participated.