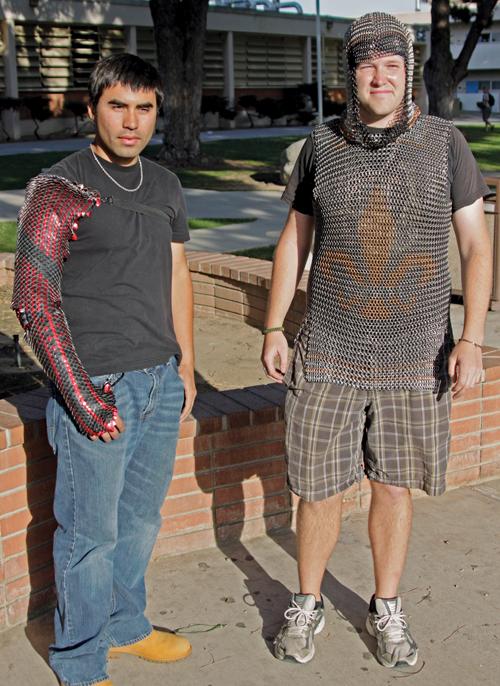 Chainmail is no longer just a thing of the past. It also isn’t the kind of chainmail you’re thinking of.

Two Bakersfield College students have taken a hobby and made a way to bring back the medieval armor and use it in more ways than what it is originally intended for.

Marc Core, who is studying to be a math teacher, and Carlos Rubio, computer science major, make chainmail wardrobe as well as jewelry and other knickknacks, out of different types of metals.

Chainmail is based back to the Middle Ages, when knights would use the mail, or chainmail, as a suit as a way of defense.If a sword or sharp point were to try to break through the suit, it would then be turned into a blunt instrument to protect the knight from getting hurt. The tradition of making chainmail is now seeing a resurgance im popularity. Not for it’s defensive purposes, but rather as a hobby for aficianados of the ringed gear.

Today’s chainmail, however, is made much the same as the chainmail from old, though today it is made from some different materials that weren’t available to craftsmen of the past, such as aluminium and titanium.

The metals that are accessible to use are aluminum, steel, brass, bronze, copper, titanium, silver, and gold.

They also take time to make colorful creations by changing the color of aluminum by anodizing and sending electrical currents through it.

Core said out of all the metals they’ve used, niobium is his favorite.

“It’s mostly used in electronics,” he said. “It’s a rare earth metal, pretty expensive, not like gold or silver, but it can also be colored like aluminum.”

Core said he started his first project about 10 years ago.

“I was a freshman in high school and just in the last two years.

“I’ve gotten a lot more into it and making money off of it,” Core said. He originally began because his brother got him into it.”

Core and Rubio both graduated from Liberty High School and have been friends since then.

Although Rubio hasn’t been involved in making the chainmail projects as long as Core, he’s making up for it now. He has made a sleeve made of aluminous black-and-red scales and 3/16 size steel rings.

The two have been taking their work to First Friday for about a year now, selling and sharing with the public their artistic designs.

First Friday is an arts and crafts fair held downtown every first Friday of the month. Items range from $10-$40.

Even if they don’t sell anything, they say they have fun going out and meeting different people who are interested in their work.

“We get tons of people coming up to us saying how cool it is. That’s almost as good as selling twenty, thirty bucks of stuff,” Core said.

“Free karma is what it is,” Rubio said with a grin.

The money that comes from the things that they sell helps them in funding their bigger projects, such as a full-on outfit that is made all out of metal.

The materials put into a shirt that Core made was said to be about $120 dollars.

A local band that carries a Medieval type theme, Heralds of the Sword, discovered Core and Rubio’s work at a First Friday event and asked if they could make a chainmail cap that the band plans on raffling off at the concert.

While showing off their work may generate business for them, Core says it’s not why he does it.

“I’m not out there to make a business out of this,” he said. “It’s fun for me, it’s my hobby. If I make money off of it, that’s great. I can fund the rest of my hobby and make sure it’s for myself.”

Core and Rubio encourage others to come out to First Friday to check out their work and enjoy the work of others.