Runners get colorful for a good cause 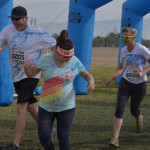 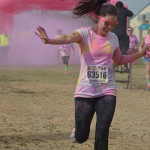 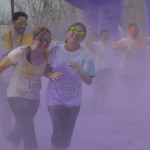 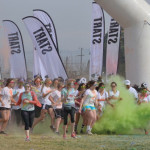 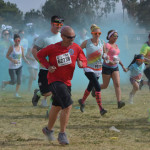 Several signs around the Kern County Fairgrounds read, “Get rad or dye trying,” and that’s what approximately 1,000 participants did on Feb. 15 at the Color Me Rad 5K, with tons of colored dust already floating through the air before the run began.
Runners showed up in multi-colored shirts, tutus and sunglasses to run for the Ronald McDonald House charity. With ages ranging from young children to the elderly, the excitement could be heard as they cheered as each wave started.
From small packs of the colored powder to fire extinguishers filled will all different colors, there was no getting away from the dust as the wind kicked it around. Two young children could be seen chasing each other with a small pack throwing it at each other as their mom stood back taking photos of the pair of them.
As the announcer readied each wave with a countdown to start, there was music that played and more cheering from runners. He told them, “Don’t try hard, have fun,” and would wave them on to start running.
Elaine Reyes was there to run with her kids.
“It is something fun to do with the kids,” she said and added, “They like the dress up and the pictures part of it.”
So that all the runners could all get covered in the colors, they started making smaller waves because of all of the participants. One runner Sam Creech, a manager for Rite Aid, said, “We come out for the colors and to get dirty, but also for the charity.” Her group in agreement said that the charity is a good cause, but the big excitement is getting dirty.
Some of the runners who were part of bigger groups had opted to name their teams. Such names that could be seen were ‘Tuff Cookies,’ ‘Mellow Yellow,’ and ‘Halos,’ whose runners were also seen wearing little halos on their heads.
Jennifer Leisten, who was there with her daughters, said she was looking forward to the run even with just the three of them. Her oldest daughter, when asked if she was looking forward to being able to get dirty and not have mom get mad, just smiled and nodded. Her younger daughter just watched as the colors flew through the air.
As runners ran through different colored tunnels, they were covered in whatever color the tunnel happened to be.
If you didn’t register before the race, it was OK, as there was a booth set up for new registration. When you did, there were color packs in the packets received by the runners. The ages of runners varied from young children around the ages of two, to mid-60s.