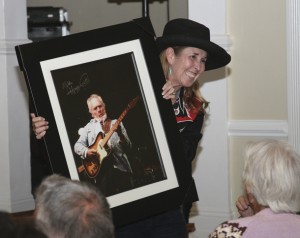 Country music could be heard from outside the doors of the Kern County Basque Club during a fundraiser for the Merle Haggard boxcar home, which took place on March 7.
With the current state of the Haggard home still in the air, Glenda Rankin and Diane Sharman, founders of the non-profit organization Citizens Preserving History, have been working hard to get it moved into the Kern County Museum.
A big reason why the organization is actively lobbying for the home to be moved is due to its poor location. It is currently located on private property where the general public isn’t allowed to view it. The home also hasn’t been maintained to the standards that one would hope a historical structure would be.
According to Lori Wear, the curator at the Kern County Museum, there has been a recent boost in interest toward the house.
“Until recently, there had not been a lot of questions about the house, but with all the recent publicity, there have been more questions about the house itself,” she said.
Citizens Preserving History has been trying to get the home moved since 2008, after someone had brought the concern to the attention of the founders.
Although the home is privately owned, the current owner has only asked that once it is moved there be a structure put in its place so that there isn’t just an empty lot or foundation.
After the home is successfully moved into the museum, there are hopes of restoring it to the way it looked in 1935, when the Haggard family lived there.
Rankin mentioned a conversation that she had with Merle Haggard the day before the fundraiser.
“When we met Merle yesterday, we had said this was to honor him,” she said. “Merle said that it wasn’t to honor him, but to honor his dad. His dad built the home.”
Rankin and Sharman are hoping that with bringing the boxcar home to the museum there will finally be some progress on the master plan the museum has been planning for the Bakersfield Sound.
Wear and the museum would love to create a space to replicate the old Blackboard, which would be around 5,000 square feet when completed. The structure would then house more of the items from the Bakersfield Sound including more of Haggard’s collection that are currently being stored in a basement.
As it sits now, the small collection they show is in the back of a building and just a couple costumes one of which is a stage costume Haggard wore, including his boots.
With no set date for relocation, as of yet, the sisters are shooting for some time in June. When it is moved, it will be done in pieces so that the public can follow along with the additions. After it is moved, it will be two to three months before it is completely restored to its original state.
There are three possible spots that they are looking to place the house in Pioneer Village.
There were several different ways that Rankin and Sharman had decided to raise money during the fundraising event. There was a live auction, which included a signed guitar by Haggard himself, as well as two signed pictures of Haggard singing at his daughter’s wedding. The guitar raised $2,000 while the pictures went for $425 and $700.
Also a raffle was held with prizes including a guitar, a weekend getaway at Rankin Ranch, and either 25 or 50 pounds of beef from the Rankin Ranch.
The next event will be held April 6 at the Kern County Museum to celebrate Haggard’s birthday. Although he won’t be there, they still want to celebrate it with cake, ice cream, and country music.
During the event, as a special deal, the museum will be offering 50-percent off of a year pass to the museum for those who attend.
For any other information about the Haggard boxcar home, visit Citizens Preserving History on Facebook, or go to the Bakersfield Sound website.