Cuisine for an ‘Orthodox’ cause 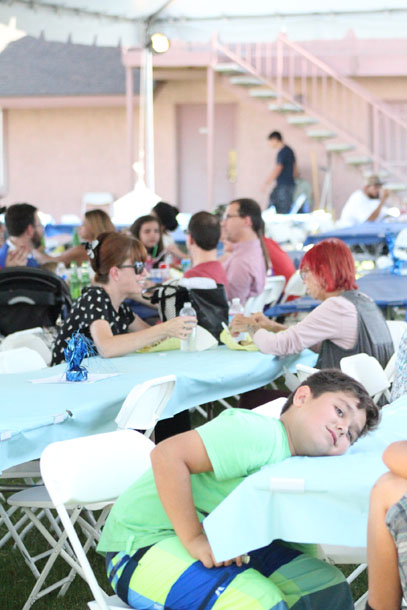 The Greek Food Festival took place on Sept. 5-6 at the Greek Orthodox Church. There was a festive atmosphere with the sounds of traditional Greek music in the air. Many people took part and the gracious disposition of the congregation was the most palpable feeling in the air.

There were many varieties of traditional Greek food including: dolmades, spanakopitas, tiropitas, shish-ka-bobs, feta cheese, Greek olives, Greek ring bread, Greek meatballs with sauce, rice, gyro sandwiches, Greek lamb chops, Greek coffee, and falafel. There was something called a “baklava sundae” and a whole room full of Greek pastries. Gyros were predictably the most popular item by far.

It was a bustling festival after about 6 p.m. when the real crowd finally showed up. A group of children and young adults from the congregation gave a traditional Greek dance dressed in what must have been traditional Greek garb. There was live music and traditional Greek beer, Mythos, which went down pretty smoothly served by a very friendly and generous bartender.

Walking around wearing a genuine suit of Spartan battle armor was a card-carrying member of Legion 10, a re-enactment organization from San Francisco. He said he was present mostly to expose the children to Greek history and Greek culture.

BC alumnus Ted Budy, 61, was the main person to talk to from the congregation and had quite a bit to say about just about everything. He was fond of laughing and cheerfully served up chicken dinners to the crowd for the sum of $10 each. He was happy to talk about the festival and its meaning. He said that the festival was meant to be a community outreach project to help connect the church to its local roots and engender positive energy between the neighborhood and the congregation.