Bachelors auctioned off for a good cause 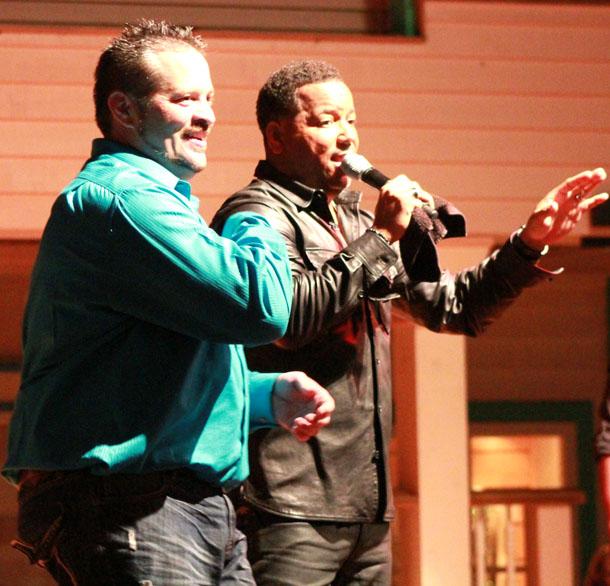 Since June of this year, the Boots and Bachelor’s auction has been in the works to raise funds for the Bakersfield homeless center, and on Sept. 26, it took place at the Crystal Palace.

With tables and chairs set up all around the stage and even up in the balcony, close to 400 women packed themselves inside for the event. The women would then bid on a bachelor for a date that would be determined at a later date.

Gill also commented about how the event has been taking place at Crystal Palace for the last nine years. Before that, it was held at the Petroleum Club and Coconut Joes, and is by far their largest fundraiser that they hold every year.

The goal for this year was to raise $100,000 and with this event, they expected to raise that if not a little more.

“We have a great group of volunteers, and we have become a close-knit group of friends and professionals. We dedicate a lot of our time during the year to this and because of what we do a lot of children and families are taken care of,” said Gill.

Before the event had started, a video from one of the members that the shelter had helped was shown to all the guests, and right after, the emcee got up and started to introduce the bachelors as they came out one at a time to be auctioned off.

The idea to hold the auction came from former committee member Jay Williams.

“We had challenged each of the members so they could raise 10,000 dollars each, and he said I’m having a bachelor auction. We held it at one of the pools of the local hotels and it was this nice little event with some of the people from the oil industry and he met his goal. After seeing how well it was received, it grew from there,” commented Gill.

According to Cindy Lyday, external affairs manager for the center, the committee has been meeting every other week to plan the one night event and get the volunteers together.

Jordan Lee, one of 12 bachelors, commented, “At first we were lured in, and then they explained about the kids and what the event was for. I’ve already been in that particular situation, and I felt like this was my chance to give back.”

John Ryan Pilling, another bachelor, also mentioned that he was looking forward to the good time, “It’s all about the kids and helping them have normal lives, also helping the parents to get back on their feet.”

Pilling was the third bachelor of the night and when he was auctioned he brought in $500 to the center, Jordan was eleventh and made $800.

The bachelor earning the most that evening was Bryan Hockett, who went for $1700 and they also announced when he was up that he came with a four-day cruise package.

Besides the auctioning of bachelors there were several handbags auctioned, as well as a trip to Cancun, and a Louis Vuitton handbag as well.

“It’s a little bit stressful, but at the same time it’s still for a good cause, and regardless of what we make, it’s still going toward that good cause,” said Lee.

The center has been at its current location since 1992. With 174 beds to accommodate the homeless, the workers still manage to fit in extra cots and even cribs to be able to fit the over 200 people every night. With close to 100 of the occupants being children.

“I think that any time you get to have the opportunity to have several 100 people in front of you, you get the chance to talk about what is going on. There are a lot of people hurting a great deal in our community, so this is a fun and somewhat silly way to raise money for something that is absolutely necessary,” Gill said.

Both Gill and Lyday hope that with this event and several more to come that the community will become aware to how many homeless families there are in the Bakersfield area.