Bakersfield’s Greek Orthodox church has lots of BC connections 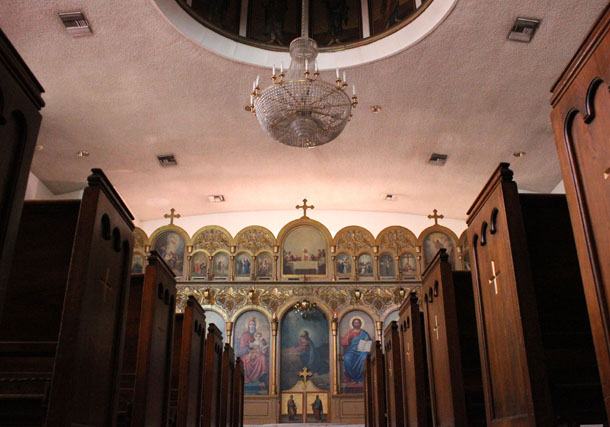 Hiding on the east side is a close-knit family of Greek immigrants and American converts called The Hellenic Community of St. George Greek Orthodox Church. This community has been an integral part of Bakersfield history and has influence over our lives even today. Past members have founded key businesses such as early grocery stores, and several have connections to Bakersfield College.

BC alumnus Harry Chicklenis, 77, of Bakersfield is the church historian and he says he came to BC at an exciting time.

“I worked and went to school,” he recalled of his time at BC from 1955-57. “We are talking 14-hour days, but it was important. We were moving the campus to Panorama. I worked for the business office, and in those days it was in the basement of a building called Luden Hall on the BHS campus. I helped move BC to Panorama!” he said.

He remembered key figures from BC’s rich past vividly. “I knew Gerry Collis very well when he was coaching BC. The Renegades were the biggest thing in town and no one could pack that stadium like they did. It was like the whole world came to watch them play. The kids loved Gerry. He made his athletics program a character exercise for them as well and gave them all the time he could.”

Collis was a fellow Greek, and Chicklenis said they hit it off right away. “My first two years at BC inspired me to go on to earn a master’s degree, which was not my original plan at all,” he said. “It was a big, big step forward for Bakersfield education, and we were the first ones to enjoy it. We broke it in.”

In the end Chicklenis attended the California State University of Bakersfield where he earned a master’s in school administration. He went on to teaching and counseling positions for about 14 years and then spent 29 years as the supervisor of student services for the Bakersfield school district.

Chicklenis talked about his church with a little more reverence. Of the church today, he said that it remains a successful experiment in emigration and Americanism, and that he is proud to be a part of it.

Father Joseph Chaffee of Rosedale has the kind of presence that takes a minute to sink in. While sitting in an empty chapel surrounded by the icons of his faith, he spoke a little about his life and what brought him to the Greek Orthodox Church in Bakersfield.

Originally from Santa Barbara, Chaffee had a crisis of faith fairly early on in his life that led to his conversion to the Greek orthodox faith. “Trying to follow the western view of god and faithfully follow my heart was breaking my spirit. When I came to Greece and found the fullness of the lords light I was set free,” he said.

Coming to Bakersfield was an uncertain proposition for Chaffee because he was not sure what to expect. “We used to make jokes about Bakersfield when I was in Santa Barbara. We thought that people here were too conservative. Some even called them backward, and I remember people calling them rednecks too. It was ignorant of us but we were young,” he said.

After more than 10 years, Father Chaffee says he is glad he moved his family to Bakersfield. “We found that it was a community of human beings like any other and it has turned out to be a wonderful place to raise our kids.” He and his wife have 10 children.

“We have sent five of our children to BC, and it has turned out well for each of them or will in time (some of his children are current students),” he said.

In the midst of answering a question there was a commotion outside and the sound of screaming to which father Chaffee missed not one beat jumping up from where he sat and bolting for the side door of the chapel.

By the time he reached the scene outside, everyone had fled leaving the impression that the local street element knows him well and would rather avoid confronting him. “Yes, this happens more than I would like. The property next door is abandoned and there has been some illegal activity, some vandalism,” he said, gesturing to the boarded up windows along one side of the room.

“We try to help anyone we can, and we are always willing to feed a hungry soul,” he said.

Ted Budy, 61, of Bakersfield, who attended BC from 1971-74, is not Greek but has converted to the Orthodox faith and found a place in the church. He is generally the guy to talk to about most things concerning church activities and serves on the churches council. He has attained the position within the church of ‘Reader’ a title representing about as far as a non-theologically educated person can go in this faith. He spoke of his conversion and the path he’s walked since then in mild tones.

“I was in a bad place,” he said. “I feared hell more than I loved god. Finding myself in this faith I was willing and able to take on the responsibilities I have today and I work hard to stay on the path now. It’s very fulfilling.”

The Hellenic community of St. George Orthodox Church has been present and active in local Bakersfield culture for over 100 years. The first Greeks who arrived in Bakersfield were immigrants who are described in all accounts as having been ‘extracted’ to the United States. They came for all manner of reasons, but evidently the most common motivation for coming to the golden empire was work with the railroad, which was in high demand at the time. Peripheral elements of their community supported the railroad workers by engaging in all manner of occupation from farming and fresh fruit stands to restaurants and shoeshine stands, including famously: the founding of Bakersfield’s first silent movie theatre. Greek immigrants must have been feeling a little lost and disconnected from their culture and its distinctive customs because a clear need for a central organization mandated to promote Greek culture and nurture the self-same faith.

By 1913, the local Greek community was large enough to organize itself into what would be remembered as its first organized form. Known as ‘The Socrates,’ this incarnation of the organization lasted until 1923 when the name was officially changed to the ‘Hellenic American community of Bakersfield’ this incarnation of the organization would come to be heavily invested in the concerns associated with helping people successfully assimilate into American society. Commonly referred to as ‘Americanism,’ these efforts included programs to assist new arrivals in learning English and preparing them to become naturalized American citizens.

It was not long before it was necessary to institutionalize the organization with an official meeting place and symbolic center for their faith the preservation and continuity of which remains a primary concern to this day. The search for an appropriate property did not take long, and by 1924 they had purchased the lot at 401 Truxtun Ave. and built a small hall, which was used extensively for both religious and social gatherings. The current building was constructed in 1947 with the purchase of the adjacent property. The original church building was not torn down, but moved to the corner of Niles and Oswell where it stands to this day.

In 1952 Bakersfield suffered an earthquake, which devastated the hall and forced the city to condemn it. Significant but not critical damage was sustained by the bell towers of the church. Over time all of these wounds have been healed and today there is a beautiful pair of buildings, which are even more pleasant from the inside.