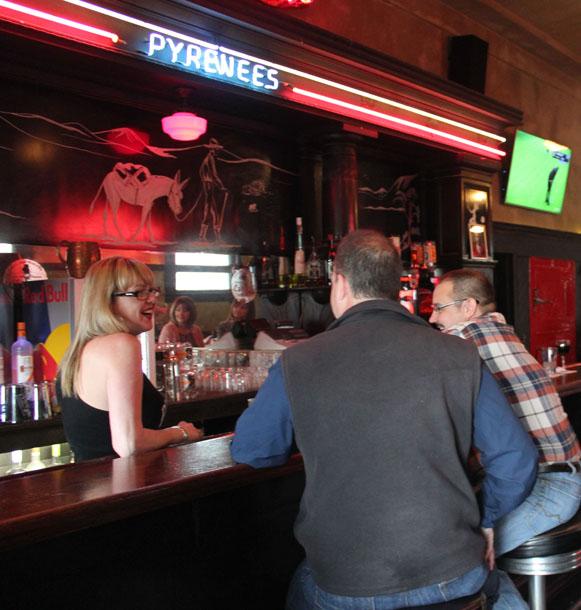 If you have ever driven down East 21st Street, you would have noticed both Narducci’s Café and Pyrenees Café, and of course heard about the recent events that caused a rift between Jimmy Narducci and Julie Crawford.

But, according to Pyrenees owner Julie Crawford, there was never really anything for Narducci to be upset over.

She said she had always been forthcoming about the show “Diners, Drive-ins, and Dives” coming to film inside Pyrenees and not Narducci’s, which at the time she was helping run.

“I told Jimmy, no this is for Pyrenees not Narducci’s. But I was so excited about it,” said Crawford.

Crawford had worked for Narducci’s for almost 10 years, in which time her and Narducci had come to an agreement on running the restaurant 50/50. The agreement had always been verbal between the two and nothing had been set in writing.

But since Narducci doesn’t live in Bakersfield but in Martinez, Crawford was left to do most of what needed to be done for the café alone.

“My advice is always get it in writing,” Crawford said concerning the agreement between the pair.

She also commented that over the last two months she had been with Narducci’s, she had been working hand in hand with US Foods and the US Foods specialist in order to create a better and healthier menu for the café. Shortly before the menu could be put together completely, Crawford’s time at the café came to an end.

Since about 2005, Crawford had been trying to buy Pyrenees, but someone else always seemed to inch her out.

This was until September of last year when she was finally able to purchase the café.

She decided that before opening the café she wanted to remodel the inside and did so. Pyrenees opened its doors under Crawford’s management on Oct. 14 of last year.

Inside the café is a bar area in the front, and in the back is a separate room for those who want to sit down and eat.

She does however hate to think that Narducci’s Café may come to an end with all of the comments that have been said, as well as so few of the employees remaining with the café.

“Out of the 25 employees we had there at the time, 22 came to work for me when I told them they were welcome here,” Crawford commented.

The bad blood between her and Narducci himself, though, will always be there. “If you are asking if I wish Jimmy the best though? I don’t at all. I absolutely do not,” Crawford said.

If you want to catch the episode of “Diners, Drive-ins, and Dives” that will feature several restaurants here in town as well as one in Taft, Crawford believes it will air around the same time as the opening of Johnny Garlics inside the Marketplace.