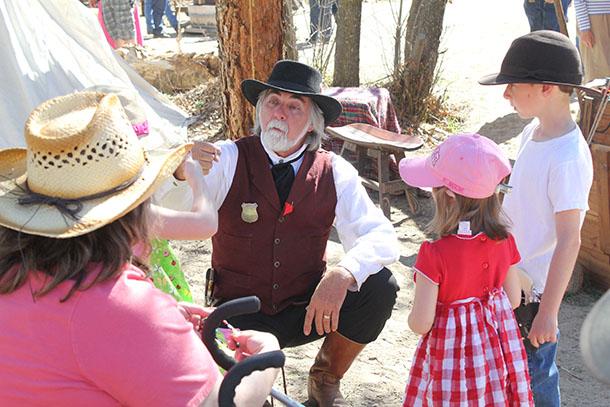 With the drought being like it has been, the wonder if Whiskey Flat Days would bring in the revenue it has in past years came in to question this year.

Located just a short drive outside of Bakersfield and up the canyon to the town of Kernville, is where the event takes place every year in the spring.

But with booths and reenactments in full swing there was no question that it would be as successful as it has always been.

During Dawson’s first year playing Hamilton, who owned the area of Whiskey Flats, he won best in showmanship which for a first time reenactor is unheard of.

“I gave the award though to my 7 year old granddaughter who also dresses up, she has autism though and I wanted her to have it … excuse me it makes me emotional,” he said.

Dawson can be found wandering the encampment area speaking with a lot of the kids that come to the event.

One of the areas that was set up this year was a mine area. According to Ernie Meeler it was the first time that they had set it up like this, it was usually located in a different area of the encampment.

“Saturday we had set off 10 to 12 charges inside the mine, it was pretty awesome,” commented Meeler.

One of the reenactors Ringo came over to some of the kids that had watched the reenactment and passed out souvenirs to them. When they asked how he was able to stand up after being shot his response was simple, “I’m like Superman.”

During certain times of the day people can gather at the middle of the encampment in order to hear some music from the band The BillHillyz, dressed in period clothing of the western area they would sing and play for anyone willing to sit and listen.

Not only did they play for patrons, they also took the time to teach some of the young kids in attendance how to play the washboard.

In the encampment area were a few booths set up that you could purchase necklaces and other things that would fit with the period of the time.

Located west of the encampment were several rows of booths and areas to eat.

One vendor that is always there is Marge Powers, the wife of the late Bob Powers. She makes sure to set up a booth every year and answer questions about the area of the Kern Valley as well as her husband’s books that he has written about the area.

Powers’ books focus mainly on the people who have inhabited the Kern River area for generations.

There is also a carnival for the kids to enjoy themselves, as well as having several contests such as frog jumping that was focused on just for them.

One row of booths that was set up was just for food, from hot dogs to tri-tip. Several lemonade booths were set up around the event where you could buy a tall glass and be able to refill it all day long the day that you purchased the drink.