Geology student proves to be an awesome excavator 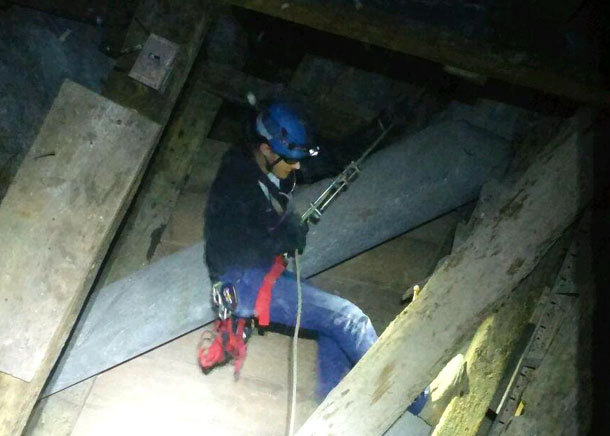 Over winter break, Bakersfield College geology major, Max Janszen, 21, and some old friends of his went into the desert in New Mexico to explore an old, dangerous, abandoned mine.

The adventure began when Janszen hopped on a plane out of LAX and flew to Philadelphia to meet up with Danny, Mike, Maria and David Edwards, Joe Sepiol and Mia Huffman. Janszen met Danny and Mike while attending the New Mexico Military Institute.

“I hadn’t seen Danny in about two years, and it was great to get back together,” said Janszen.

While in Philadelphia, the group planned out the trip. The planning included what gear to bring, signaling methods when inside the mine, knowing the route and approach, and rehearsing rescue tactics for vertical environments.

“To plan everything out properly, it took about a day,” said Janszen.

All members of the group had experience in doing things like this before and some sort of emergency medical training, explained Janszen.

“Make sure to get the proper training, experience, and equipment before attempting anything technical like this,” said Janszen.

The gear consisted of the following per person: food for a day, water for a day and a half, advanced medical supplies, three sources of light totaling up to about 2,000 hours of illumination, 10 ChemLights (blue, green, orange and yellow), rigging gear, extra rope, helmets, eye protection and three sets of lithium ion batteries for their 3,000 lumen head lamps. They also had a gas meter that detects hydrogen sulfide, low oxygen, lower explosive limits, and carbon monoxide.

From there, the group packed up the car and set out on an adventure to New Mexico.

“I flew to Philly, then the team drove all the way to New Mexico…Can you imagine putting about 1,200 pounds into a Mazda 3…The car was packed with so much stuff that we could barely see the windows,” Janszen said.

The group had spent about six hours in the plane and then spent about 32 hours in the car the next day until reaching the destination in Las Cruces, New Mexico. “We saw some crazy shit on the way,” said Janszen.

From Las Cruces, they drove out to the desert where it was about 20 degrees outside with snow on the ground, when reaching their destination, they still had about a half-mile walk to where they could enter the mine.

“If we are in the desert, we are always armed,” said Janszen.

While on their way to the mine, they came across an opening and decided it was more than good enough to enter there.

“We repelled through a stope that had collapsed,” said Janszen. A stope is an area of the mine where it has been hollowed out due to it being mined.

For safety purposes, Maria and David stayed at the surface with radios and the coordinates of their location in case anything went wrong down in the mines and they could provide assistance or contact the local authorities.

They repelled about 480 vertical feet into the mine. Once inside the mine, the ChemLights came in handy, the blue ChemLights were attached to their feet so they could keep track of each other, yellow to mark rock-fall areas, orange for drop-off zones and green to mark their trail so they didn’t get lost 480 feet underground.

The group started to explore the mine and started finding old mine carts, mine tracks, newspapers, sticks and boxes of TNT that they could see were unstable due to the nitroglycerin sweating out of the TNT sticks.

“We were really tempted to bring back some TNT, but it was extremely unstable. So we never got within 15 feet of the stuff,” said Janszen.

Janszen had found a detonation line or transmission line and decided to follow it when the old woodwork of the mine scared him. The ladder he was climbing came loose and flipped around on him.

“I was climbing a wooden ladder following the detonation cord or a transmission line just to see where it was going,” said Janszen. “It was really sturdy, but there were times when I was nervous.”

They split up for a little bit and had their own agendas.

“While Danny and Mike were exploring the mine, me and Joe were hacking away at the walls, ceiling, and floors for ore samples,” said Janszen. By that time it was almost 3 a.m. in the morning and they had gone into the mine at 10 p.m.

On their way out, they were hoisting up some treasures that they found which mostly consisted of ore, drill bits and mine cart track nails, and a few old newspapers. The bag and rope that was carrying their souvenirs kept getting stuck on the side of the mine and causing rock-fall for the people climbing below Janszen.

“The rock-fall… that’s why you wear a helmet,” said Janszen

Once out of the mine, it was time to get back to Las Cruces and clean up and get ready to go home.

“We came out of there completely black, and I still haven’t gotten it out of my boots yet,” said Janszen, “At the end of the trip I was exhausted and it was very well worth it. I wouldn’t of had it any other way.”

By the time Janszen got home all he wanted to do was sleep. Well, he did, for a day and a half, only getting up to eat and go to the bathroom.

Jenszen is going to be putting on a sporting clay-shooting friendly competition at Kern County Gun Club on April 18 with an $85 entry fee. A variety of prizes will be given out and Janszen will be giving the proceeds to the Geology Club.

Janszen and classmate Thomas Jannuzzi are trying to get a “Makers Group” together outside of school so that they can build and trade goods by utilizing hand-skilled trades. If you’re interested, contact Max Janszen on Facebook.