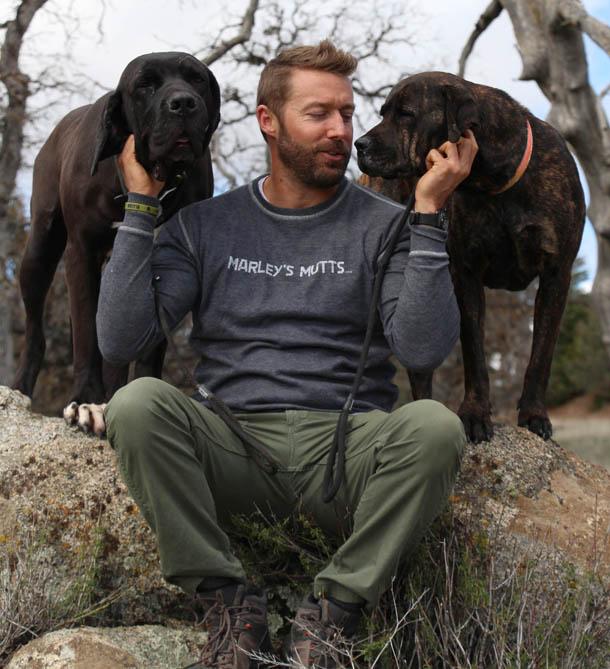 Before Zach Skow and his rescue organization, Marley’s Mutts, started rescuing “death row” dogs, Skow was the one who needed rescuing.

“I wasn’t used to doing anything without alcohol or drugs. I was scared of everything, absolutely petrified,” said Skow.

Skow has had dogs in his household most of his life. He also started in dog rescue in 2005 with the Humane Society. But these are not the reasons why he now rescues dogs.

From an early age, Skow was heavily addicted to drugs and alcohol. Being intoxicated was his norm and when he was not intoxicated he felt out of place in every aspect of life.

“Being physically addicted really prevented me from succeeding in anything I tried,” said Skow.

“I drank in class. I drank in the parking lot at BC. I’d go to the liquor store around the corner and just fill up a cup with vodka or just beer. I’d buy an Old English 40. Then brush my teeth in the parking lot. Just ghetto and shady shit,” said Skow.

Skow was 23 when he realized that he was physically addicted to alcohol.

“I tried to go one day without drinking, and I went into full blown withdrawal,” said Skow. “Alcohol withdrawal is the most dangerous type of withdrawal. It can kill you.”

Skow had to go to the hospital, and they told him he needed a medically aided detox. He said, “I don’t plan on not drinking I just plan on going one day … are you crazy.”

Shortly after that, Skow’s liver failed. He spent two months at Bakersfield Memorial Hospital. He then got transferred to Cedars-Sinai Medical Center in Beverly Hills where he, coincidently, was born. Cedars-Sinai is one of seven transplant hospitals in California.

Skow needed a liver transplant but had to be sober for six months before his body was healthy enough to accept the liver.

“Day in and day out things were just as bad as they could get physically,” said Skow.

Skow was going through alcohol withdrawal, causing him to vomit and defecate blood often. He also had a catheter in his back that drained his stomach.

Skow began writing a journal and walking Marley, Tug, and Buddy, rescue dogs from the Humane Society, every day.

There was a time when he felt that he didn’t want to be alive.

“The only way I could get my confidence up to not just put a bullet in my face was with my dogs,” said Skow. “They helped me face each day. We’re going to do this, it’s not just you.”

One of Skow’s struggles while being sober was that he didn’t know how to properly socialize. The dogs helped him with socializing because he didn’t feel as self-conscious when the dogs were with him.

Skow traded his addiction of drugs and alcohol with health and exercise. The health choices and exercising with the dogs began to slowly and then quickly help him get physically better.

“I took trying to live like I took after alcohol and drugs,” said Skow.

When the six months was up and he was eligible for a transplant, he no longer needed one. With the help of the dogs, he ended up rehabbing his liver.

Skow realized that the dogs rescued him when he needed to be rescued so he then decided to take a page out of Canine Canyon Ranch’s book and returned the favor by rescuing dogs.

“My biggest dream is to have a human and dog rescue side by side,” said Skow.

Marley is the pack leader of Marley’s Mutts. He breaks up all the fights and keeps everything in order in the pack. “He’s 13 now, but he is still a ‘G’,” said Skow.

Marley’s Mutts has received a lot of recognition across the world with fans in 44 countries.

Marley’s Mutts has adopted out around 250 dogs as of the end of 2014. They are already exceeding that number this year with the addition of transporting dogs out of state via airplanes.

Marley’s Mutts and Skow have gotten involved with a lot of people and places in the community.

Miracle Mutts is an educational program that Marley’s Mutts has. Miracle Mutts goes to as many schools as possible to educate students.

Miracle Mutts has an event at Beale Library every other Wednesday called Barks and Books. This event is for children who have a hard time reading.

“In order to succeed in school you have to be able to read out loud,” said Skow.

They have a Barks and Books event specifically geared to help first-generation English speakers read out loud.

Skow explained how the community of Bakersfield is amazing and thanks them for being so caring and supportive of him and Marley’s Mutts.