‘Rhinoceros,’ the first BC production in new theater 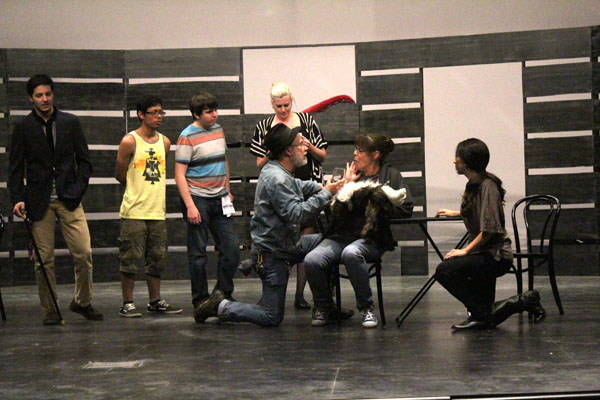 In just under two weeks, Bakersfield College’s refurbished indoor theater will host its first theatrical production “Rhinoceros,” a play that was written by Eugene Ionesco, and one that director Kimberly Chin, a professor at BC, is looking forward to seeing in completion.

“I’ve always wanted to do an Ionesco play, and this is my first opportunity to do so. I’ve never been able to do a play from the theater of the absurd,” Chin said.

According to Chin, theater of the absurd is complex to explain because those there to watch the play can take them in so many different ways. The play is not there to pinpoint a specific moment in time, rather to make it so anyone can relate to it and apply it to so many different movements throughout time.

“When Ionesco wrote this, he was thinking about what the French government and the people did during World War II once the Nazis had come into power,” Chin said. “I love theater of the absurd and satire, the comedy, but most of all the deep message you can read into so many different ways,”

The hope of the play is for the audience to watch and see that it’s about the conformity in the 21st century, that we don’t want to lose our individuality or comply and become a cookie-cutter copy of everyone else in the world.

“Sometimes people side with the bullies, they notice ‘Oh, to protect myself I should just go along with this’,” Kim said.

In total, there are 20 actors in the play, all of which are taking the theater class that BC offers students. So not only are the students playing a part, but they are also earning units while doing so. The class that is offered for those that wish to be part of the behind the scenes and on the crew, is also a credited course with the college. Between the two theater classes, they have been able to make the production possible for BC.

One student, Jose Lopez, sees it all as a team effort to make the play happen for the audience.

“It means you get to be part of something bigger than yourself because you are a part of a team it’s like a team sport like football. Because there is no ‘I’ in team unless it’s in win, but that’s not good for the team. If you win, you win as a team, if you lose, you lose as a team so if we go and give it all as a team than we are going to give a better quality of show and give the audience what they need to see, laugh and hear,” he said.

The play will every night from March 11 through March 15. The start time is 8 p.m. and the doors open at 7:30 p.m. Tickets are on a suggested donation of $10 for general admission and $5 for students, faculty, senior citizens, and military.