‘Rhinoceros’ hits the stage with absurdity 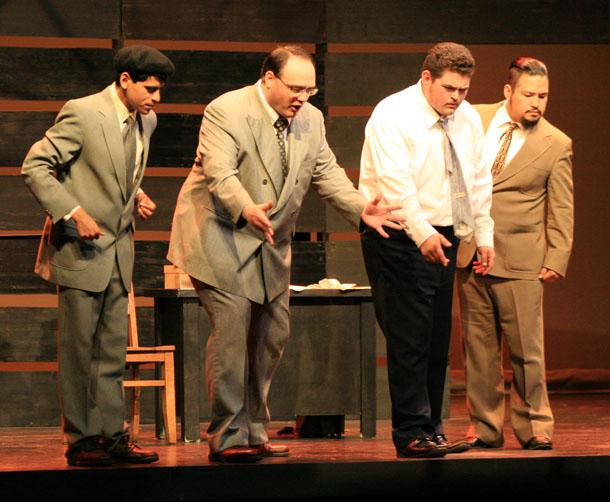 Despite all the construction going on around the indoor theater, Kim Chin and her theater class managed to put on their production of “Rhinoceros.”

The play, which is set during the time of the Nazi invasion into France, shows that instead of standing out and being different was ok. That people were conforming in order to be safe.

In an earlier interview with Chin she had expressed the hopes of people who came to watch the play, and then they could apply what they saw to their modern day lives.

The play is from the theater of the absurd, which consists of mainly 1950s European playwrights.
The viewer can take the play in several different ways, but the main theme in Ionesco’s play was conformity.

Cody Ferguson Gomez, who plays Berenger, along with Miranda Jordan Chaves, who is Daisy, have come to see those who were in the play with them as family now.

“There is family, and then there is theater family,” commented Gomez.

Throughout the play, Gomez’s character evolves. As the three acts are portrayed on stage, the story ends with Gomez’s character being a non-conformist and staying true to himself. Meanwhile, the rest of the actors turned into rhinoceroses.

During act three there is a scene in which Gomez and Chaves kiss, but they both explain it was far from awkward. Right before the play, they had told theater director Kim Chin that they were a couple.

“It was really funny breaking the news to Kim because we didn’t let anyone know, Kim had asked how we felt about the scene and I said actually we’re a couple,” said Chaves.

“We messed around with her at first though, saying we don’t know and we don’t know where the other’s mouth has been. But after a couple minutes we told her,” Gomez said.

March 11 was the opening night, and an estimated 35 people came to see the show. The actors hoped that as the weekend came, that more would come to see the performance.

Throughout the play, there are several actors dressed as mimes. They never change into rhinoceroses, but they herd the others once they have conformed.

One mime, Sarah Cameron, discussed being part of the team and working together to make it fun and entertaining for the ones who come out to see the play.

“I feel it’s great to be part of such an awesome cast and crew, we all work off of each other’s moves for a well flowing performance,” commented Cameron.

With all the lines in the play, the one that Chaves agreed people could relate to is when the lead character Daisy says they need to fight for happiness.

The next play that will take place in the SPArC indoor theater will be Mother Courage and her Children by Bertolt Brecht and directed by Randy Messick. This play will run April 21 – 25.