Kubanda stops at BC while on tour 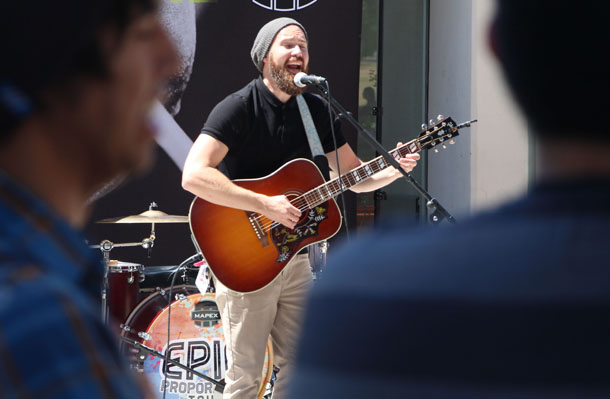 The sounds of Sam Smith’s song “Stay with me” could be heard around campus on April 13 just outside of the Campus Center.

But it wasn’t coming from a CD over the speakers that were set up, it was coming from solo artist Gabe Kubanda who had his equipment set up to perform for Bakersfield College students.

Kubanda is currently on tour with Epic Proportions Tour alongside two other bands, Far Away Stables and Captain Squeegee.

“Every tour, we email all the schools and let them know who the new band is that will be touring with me that year, and whichever school calls back, gets the show,” Kubanda said.

Before realizing the guitar was the right instrument to play, Kubanda tried the piano and the drums first, but like many, he found they weren’t the right fit for him.

When he picked up his guitar and started to sing, that’s when it clicked it was the right fit for him.

Kubanda commented, “It just clicked, and I loved it!”

With four days left of the current tour, Kubanda comments that he never saw himself being where he is now when he started singing, performing, and writing his own songs at the age of 16.

“I was hoping that I’d join a band in high school, and myself and three buddies would rock the world. Like the Beatles or the Rolling Stones, or even U2,” said Kubanda.

Being on the tour has been easier with the bands because of how driven and talented each of them are according to Kubanda. Despite the hard work each band goes through to perform, everyone still manages to be laid back with one another.

“Both of the bands have also been acting as my backing band, so it’s been really fun jamming with all of them,” commented Kubanda.

The tour will make its way back through California in the fall and Kubanda hopes to see some of the people he has met during the spring tour, at his fall tour.

If you want to check out any of Gabe Kubanda’s music, see where he will be performing next, or to purchase any of his merchandise you can follow him on Facebook or go to gabekubanda.com.