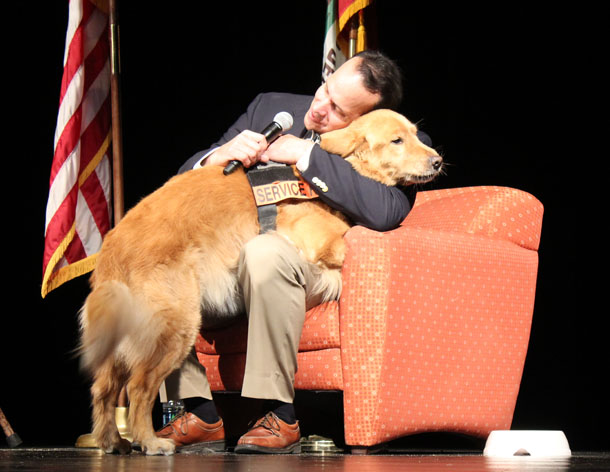 Capt. Luis Carlos Montalvan visited the indoor theater at Bakersfield College April 7 to discuss the importance of service animals, as well as letting other veterans know they aren’t alone in their fight with the numerous things they go through after tours of duty overseas.

Montalvan now resides in New York City with his service dog, Tuesday, but living in New York he says is electric because there is always something going on.

After two tours, Montalvan returned home physically and psychologically wounded, and after dealing with his own wounds he wanted to find a way to help others.

The book “Until Tuesday,” was his way of expressing what had happened before and after receiving his dog, Tuesday, with the help of a local group that paired veterans with service animals.

His main concern though is the returning veterans who have served several tours of duty who retire after, and they end up suffering from one form of Post Traumatic Stress Disorder and receive little if no help from Veterans Affairs.

“We say we won the war, but we actually lost it,” Montalvan said.

“What isn’t talked about is the effects of war, and what families and countries go through because of it,” he commented.

His greatest hope is that during his reach outs at conventions and speeches with those who will take the time to listen, and that even for one person it will click and they realize they need to get some form of help no matter whom they turn to.

Serving 17 years in the Army, Montalvan still has the love for the armed forces, “I love the army still, but it breaks my heart,” he said during his speech.

After the speech Montalvan signed copies of his book for those who had purchased it, some of which can be found in the BC bookstore on campus.

For anyone wishing to speak with Capt. Montalvan they can do so by emailing him at [email protected]