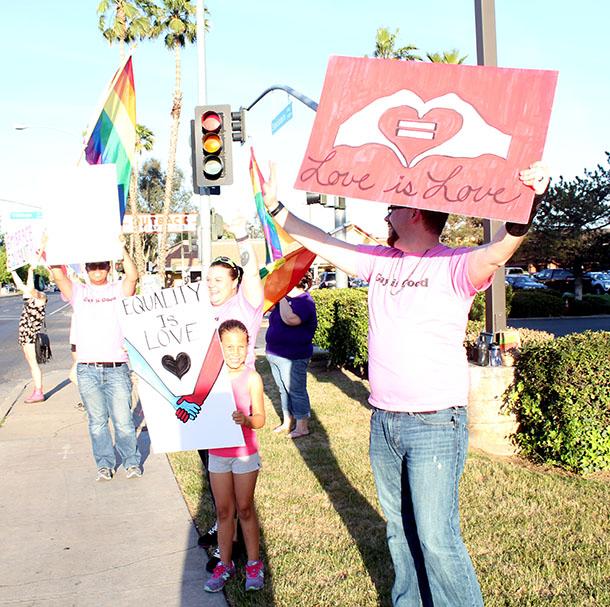 With the Supreme Court moving forward to a decision on marriage equality, members of the community rallied in front of the Stockdale Fashion Plaza Center in support of equality.

Jamie Weddell is hoping that with the ruling, there will be normalcy between one class versus another. “It would mean everything, to know it’s normal and we don’t have to classify ourselves as a different class,” she said.

Weddell has a 7-year old daughter, Jessica, who she says is very proud when someone asks about her parents and she is able to tell them she has two moms and not just one.

“It shouldn’t be a gay marriage, it should just be I’m married,” Weddell said.

Dustin Marquez, who was holding a sign of two hands making a heart with the words “Hearts not Parts” written on it, is hoping for a time when he and his partner will no longer feel like second-class citizens and won’t have to explain their marriage to anyone as well.

“My kids shouldn’t have to suffer my heartache,” Marquez commented.

The ruling as far as marriage equality is concerned, though, looks like it won’t come until sometime in June.

Which leaves many wondering what will happen now that it’s left in the hands of the Justices of the Supreme Court.

According to Kaylin Schill, she sees it like there is still one person always trying to bring in some form of religion when that isn’t the case, “They want to bring in Christianity when it shouldn’t even be involved,” she said.

Even despite the off comments coming from across the street from members of the Bakersfield High School Drillers baseball team, it wasn’t stopping any of the members of the rally.

Horns of cars that passed by honking in support of marriage equality would generate screams from each member letting them know that there was one more person supporting their rights as members of the community.

“Two dads or two moms are better than none,” said Marquez.