Relay for Life season has a good end 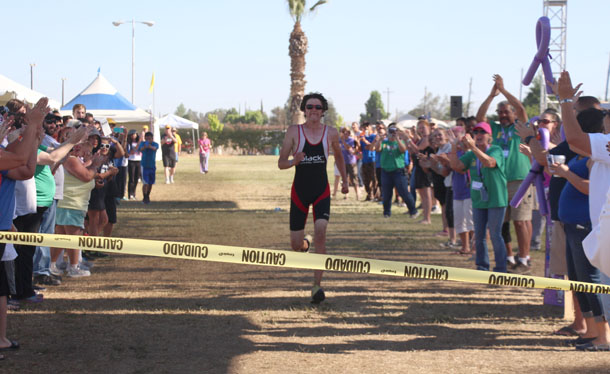 With the end of the Relay for Life season slowly coming to an end in June, the charity held its largest event at the Kern County Fairgrounds on May 2-3.

With well over a 100 tents and booths set up, the event kicked off at 9 a.m. Relay for Life teams had already raised $850,000 for the season as the event began. By the end of the event, that number had gone over $1 million.

The last lap of the event took place on May 3 at 9 a.m. after which the total amount raised was announced. The American Cancer Society received a check for $1,090,681.67 from all the donations and work each team went through during the Bakersfield Relay for Life season.

Laura Clayton, who along with her husband Doug, was admiring the bags set up along the walk area that read “In Memory of” or “In Honor Of.”

“This is our second year, we’re walking for my mom and his grandparents,” said Clayton.

Clayton, unlike the others walking, was not part of any of the teams, but rather just walking to support the hope many have.

Among the booths set up was one from Wells Fargo Bank.

The bank has been setting up a booth for the past 14 years with those who participate in the walk, but mainly they are there for support, according to Catie Holsonbake.

“We’re giving away items when people spin the wheel. We’re mainly out here in support of everyone,” commented Holsonbake.

Karen Jackson, of team I Love Lucy, started participating in Relay for Life in 2010 in honor of her lifetime friend Shalona Pendly.

Jackson, with every year, hopes that one day there will come a time when people no longer fear the word cancer.

“Each year you feel different than the year before,” Jackson said. “This year is more upbeat, and there is more of a positive feeling.”

She’s been asked over the years why she continues to work so hard to raise money despite knowing at the end of the season she is tired. “My heart would ache if I didn’t help,” she said.

Jackson, like many other teams, sold raffle tickets for different items, many of them donated by the community.

“The community really pulls together and helps, everything is donated except the ‘I Love Lucy’ memorabilia,” said Jackson.

Team I Love Lucy raised just shy of $3,500 before the event had started.

“We aren’t like the big teams who raised $50,000, but every little bit helps,” commented Jackson.