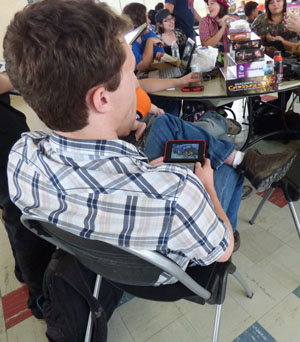 When asked whether they prefer the higher production value offered in home-console gaming or the convenience and portability of handheld gaming, three out of five Bakersfield College gamers said they like a mixture of both.

Ian Bean, 28, has been playing videogames since 1992. He has played on many gaming consoles including the Atari, the Sega Game-Gear, PC, and every GameBoy, Nintendo home console, Xbox console, and Playstation console ever made.

Bean identifies himself as a very hardcore competitive gamer. He went on to elaborate how competitive of a gamer he was  by stating, “I broke my TV while playing GTA Online.”

When asked whether he preferred to play on a handheld or home console, he stated he spends an even amount of time on both and enjoys a combination of the two.

Brennan Williamson has been playing video games for 10 years. His very first console was a hand-me down Super Nintendo.

Williamson identifies himself as a casual gamer who plays more for fun rather than for competition.

Williamson, similarly to Bean, enjoys a combination of both home console and handheld gaming. He went on to say, however, that, “Handheld is the better system for JRPGs.”

Salvador Murillo, 20, has been a gamer since he was about 5 or 6. His very first console was a Super Nintendo. He has since played on the Xbox, Nintendo Wii, DS, 3DS, and WiiU.

Murillo identifies himself as both a casual and hardcore gamer who often dabbles in the competitive nature of Pokémon Omega Ruby.

Murillo stated that he likes home console gaming and handheld gaming equally because he can play either with friends online or locally. He later commented that, “What really matters is the game library.”

The other two BC gamers said they were die-hard home-console fans.

Timothy Giese, 20, has been gaming for 15 years. The consoles he’s owned range from the Sega Dreamcast and Nintendo 64 to the GameBoy and the Playstation Vita.

Giese identifies himself as a casual gamer who plays solely to enjoy the game.

Giese has played a variety of gaming consoles but said, “I prefer home-console gaming because there are more high-quality games available.”

Chris Storer, 27, has been gaming his entire life and claims to have played on every known system except for the Sega Dreamcast.

When asked whether he identifies himself as a hardcore or casual gamer he went on to say, “About 75% of the time I’m a casual gamer, but I do partake in many tournaments for Smash 4 with Pro Lab Gaming.”

Storer plays on a variety of gaming systems but prefers home console overall since the majority of the time he plays on his Playstation 3.