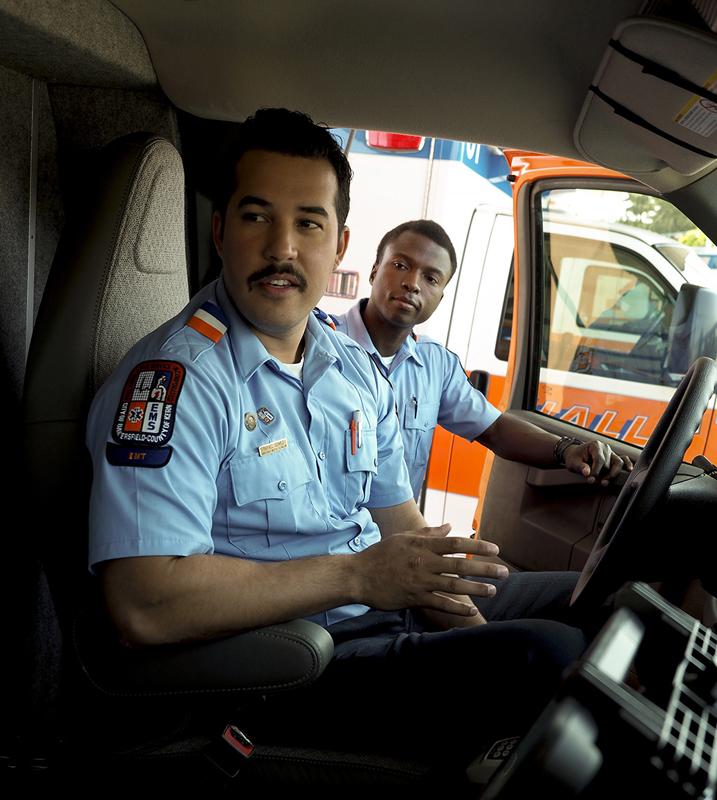 Hall Ambulance gives recommendations to Bakersfield College students wanting to pursue a career in the emergency medical field. Hall has a long working relationship with BC, and the college provides Hall Ambulance with a regular supply of BC applicants.

Mark Corum, director of Media Services, said, “It’s good for those who want to start on their careers in the medical field.”

Prospective EMTs have to be 20 years or older. Hall Ambulance recruits receive paid training for the six weeks they are learning to become an EMT. Once the training is done, EMTs begin field training. When that’s completed, EMTs are able to work on an ambulance. Applicants must also have a good driving record with no DUIs, be drug-free, and clear a federal background investigation. As an alternate path, BC offers an independent course for EMTs.

Kevin Newsome, EMT in the paramedic program here at BC, said, “Taking basic math and science courses can help you as you start to go deeper into the medical field.”

After applicants complete the EMT criteria, they are eligible to receive an achievement “where you receive a certificate upon completion. Then you would test for the National Registry. After that you would apply for the county and state,” said Myron Smith, BC alumnus and EMT supervisor at Hall Academy.

After being an EMT, anyone wanting to progress in the medical field has two options. Once an EMT has worked for a while and would like to progress, there are two options available. Smith said, “You can complete the course, get your certificate upon completion then apply to the National Registry. From there, you decide what state to apply for unless you stay in California, which they just accept the National Registry.”

The second option is for the EMT to complete general education and earn an associate’s degree in paramedic medicine. In Smith’s opinion, it is better to be a well-rounded student in the long run, but for hiring purposes, EMTs need to have the paramedic card they will receive from the National Registry.

Prospective EMTs participating in the paramedic program at BC are expected to fulfill these requirements.

Newsome said, “The paramedic program is 2-3 nights a week with a clinic portion where you have hospital hours. It also prepares you for the National Registry.”

The basic information required for anyone taking on a career in the medical field is primary assessment, where they learn how to treat life-threatening injuries, emergency breathing and airway maintenance, and circulation.

Rafael Gomez, another EMT in the paramedic program, said, “It’s quick. You have to be able to multitask, not just focus on one thing.”

Smith said, “We train them in a systematic manner so that they do the same thing every time. That way, you’re not trying to think about what needs to be done opposed to doing it.

“When we run simulated scenes there are procedures that we drill into them. For instance, from the minute you step onto the scene, you are assessing it. Seeing if people are up and alert if so you ask them to move from the scene. If people are down you are taking note of recourses you are going to need. If the scene is clean you’ll hear them yell scene is safe.”

If one wants to work within the medical field, but doesn’t want so much excitement, they can pursue dispatching.

Edward Cordova, lead dispatcher for Hall Ambulance, said, “I’ve been a dispatcher for 15 years. We rotate every four hours, where they handle about 100,000 calls per year. 99% of what we do is electronic.” After completing the three months of dispatch training, dispatchers are put on six months probation.

Another route is scheduling. Heather Lee, supervisor of scheduling, said, “There is just something you love to do and working with people is one of them.”

After going through the EMT program for three years, she decided to apply for the paramedic program and did that for six years until she made the decision to apply for her recent position, supervisor of scheduling, where she finds people to replace others on their work shift.

Lee tries to make it more fun by saying, “I got you tickets to that concert you wanted to go to.” Lee says that she usually has the hardest time finding people to cover stand-bys. “Those are the track meets and football games, but they’re always there, and there is nothing that we don’t miss.”

On top of the required courses required it takes to become a paramedic, Kennedy also had to take specialized courses, and there is a weight and height requirement that pilots weigh no more than 240 pounds and be no taller than 6 feet 4 inches.

Kennedy said, “Just working with people, you’re there for them on what’s potentially their worst day that they have ever had. You’re helping them out, and there’s a lot of satisfaction that you were able to make a difference, even if it was just a smile.”

It was this feeling that empowered Kenedy to progress through the medical field.

Newsome also said, “Even from the student’s side, it’s a comfortable feeling, because you start to meet some of the same people, and you start to talk the same information. It just makes you more knowledgeable about the EMS system as a whole.”