Learning to fly without leaving town 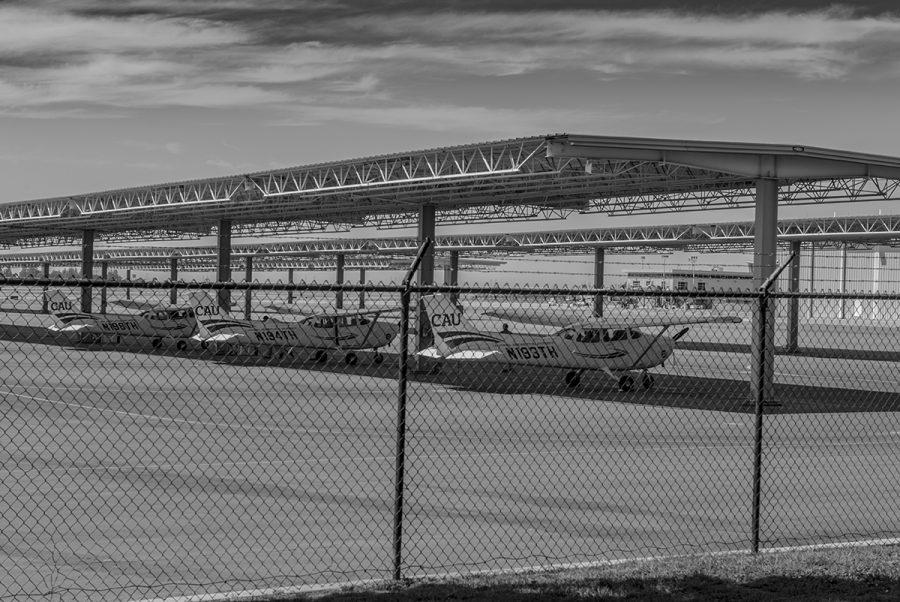 Back in January, Bakersfield opened its doors to the California Aeronautical University – a brand new flight school that trains its students at a university level for the world of aviation.

CAU, a sister school to Santa Barbara Business College, sits right on the runway near the old Meadows Field Airport on a campus that previously was used for internal pilot training for a Japanese airline. The school started its first classes this past January with a student body of only five but has grown to 20 in the months since.

“[CAU] is really about creating a complete pilot,” said Adia Smith, admissions manager at CAU. “When you enroll in our program, you’re enrolling in everything. It’s kind of an all-or-nothing kind of thing.”

The initial tuition to the school’s programs (which range from $150,000 to $167,000 with financial aid opportunities) is all-inclusive, which includes on-campus housing, dedicated cafeteria, laptop, iPad, three years of flying and fuel, and instruction.

The program readies its students with certification for commercial flights as well as a private pilot’s license, and even certification to teach aviation themselves. Graduating students are even guaranteed an interview with the school to become an instructor, if they choose.

Students in the program don’t have to wait long until they’re in the air. “Our pilots program is really an immersion program. They live it, they breath, they eat and sleep it,” said Smith. “There’s a lot of camaraderie.”

Jacob Jepson, 19, is one of the first five original students at CAU. “It’s been amazing. It’s great flying every day.” Jepson is still undecided on what part of aviation he wants to make a career out of, but he has his eyes on the California Department of Fire, which fights fires by flying over and dousing them with water.

Elza, 22, started at CAU only a month ago and already had her first solo flight. “It was amazing; it was really great.” After enough time spent in the simulator and flying with instructors, Elza wasn’t too nervous about her first flight alone.

In the world of aviation, Elza wants to become an international pilot. “I’ve always wanted to travel, and this is the coolest and least expensive way to do it.”

Within a week, students are already up in the air and in flight simulators. All 20 of the current students live on-campus, even though some of them are local to Bakersfield. “They all get their own room and their own bathroom, so it’s pretty snazzy,” Smith said with a laugh.

“We have students from all over the country, and there’s already enough that they have to worry about. We want them to be focused on the task at hand,” Smith said. “So with all of the basic needs (housing, food, laundry, parking, etc), we said ‘let’s just take care of them.’”

Smith touched on the growing CAU and how they want to maintain a steady growth. “[The industry] is not producing enough pilots to replace the ones that are leaving.” By this time next year, Smith expects the student body at around 100.

“This program in aviation is the perfect example of ‘you get what you put into it,’ ” Smith said.

“You’re going to be responsible for people’s lives. The feel on this campus is really about preparing them for that responsibility. It’s not just a degree program.”