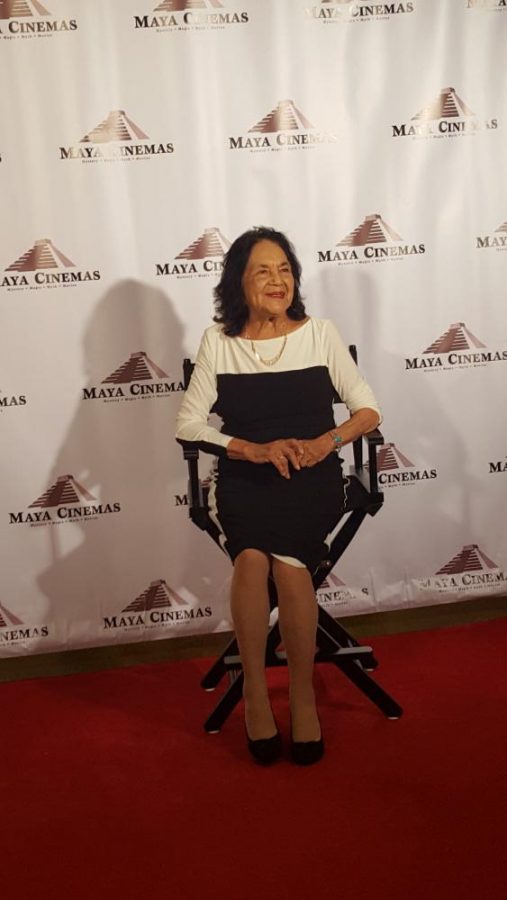 Dolores Huerta sits in fornt of audience members after the premiere of “Dolores,” a documentary based on her life.

Dolores Huerta, labor and civil rights leader, hosted a Q&A at the Maya Cinemas in Bakersfield on Sept. 24 after the premiere of Dolores, the documentary based on her life and fight for social justice.

The first screenings of the movie sold out quickly, and the theater was filled with people eager to meet the civil rights leader. Huerta entered the stage right after the showing and received a standing ovation as she prepared to answer questions.

The first question was related to her reasons for co-creating the United Farmworkers Union (UFW). She said that she decided to take action after witnessing how the children of farm workers struggled with poverty.

Huerta was also asked to share her sources of inspiration with the audience. “When you see what people can accomplish by getting organized and taking power, that’s a reason to be inspired,” she said.

Among the accomplishments of the Latino community, she emphasized the value of building a presence in Congress and schools. Further, she shared her opinion about recent actions taken against DACA students.

“Latino movements aren’t dead, and DACA students are not going away,” she said.

Huerta added that schools would be able to show her documentary to students. She encouraged them to educate children on the contributions of Mexicans and African Americans. Otherwise, society would be creating more Neo-Nazis, according to her.

Other questions came from people who are trying to drive change in their communities. Huerta encouraged them not to give up on their dreams, make activism fun, and have determination.

The documentary was directed by independent filmmaker Peter Bratt and produced by Grammy Award winner Carlos Santana. Huerta congratulated them for creating an accurate representation of her career and life.

Dolores Huerta continues to advocate for the rights of immigrants, women, and LGBT individuals. She asked people to get involved and provided information about the Dolores Huerta Foundation.