Walk Like MADD is a success at River Walk 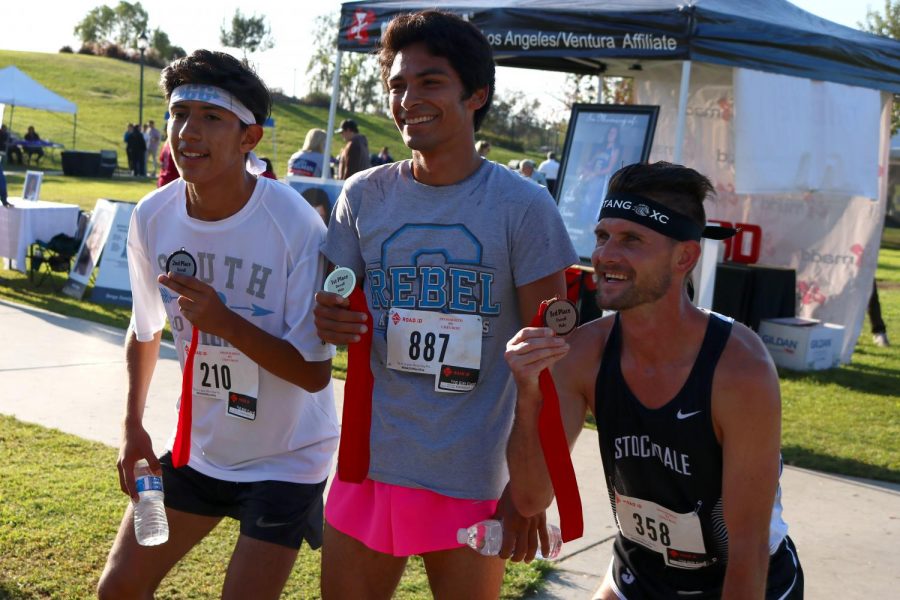 Sebastian Garcia, Mark Gulesian and Ryan Lucker show off their medals after participating in the MADD Dash event.

Around 1,000 people came out on Sept. 23, to participate in the fourth annual Walk Like MADD and MADD Dash event at the River Walk Park, and to support the local Kern County office of Mothers Against Drunk Driving.

The Walk Like MADD and MADD Dash has become one of the largest fundraisers in Kern County, raising more than $80,000 this year alone and bringing the total of funds raised in Kern County to more than $225,000 since 2014. All proceeds go toward helping victims of DUI crashes, raising awareness in the community, and continuing the fight in ending drunk and drugged driving.

The event brought out local businesses, community leaders, law enforcement, and residents as they participated in a 5K and 10K run, as well as a kids’ fun run. Vendors, raffles, and various informational booths were also present at the family-friendly event.

Before the rally and march, the morning began with an opening ceremony with statements from representatives of MADD, victims of DUI crashes, Assistant District Attorney Scott Spielman, Bakersfield Mayor Karen Goh, and Councilman Andrae Gonzales. All advocated for a future without drunk and drugged driving, citing Kern County’s sense of community in the face of adversity.

Pearson, who lost her own son to a DUI crash 15 years ago, saw little to no support for victims and their families impacted by drunk and drugged driving. She began a campaign in Bakersfield to help those affected and raise awareness of DUI crashes in Kern County.

“Seeing all these people come together is so heartwarming and means the world to me” said Pearson. “Many of the participants here today have lost loved ones to this 100-percent preventable crime, and unfortunately, there will be many more affected unless we can end this tragedy today. But there is hope. Our community is done with seeing [its] members hurt and this event and the people who’ve come out here today is proof of that.”

According to Pearson, with help from dedicated volunteers such as Jorge Barrientos – the current Marketing Director for Chain | Cohen | Stiles – the event has expanded to new heights.

Barrientos – a volunteer of the MADD Walk/Dash since 2014, and one of the major coordinators, explained that there are three vital messages Mothers Against Drunk Driving tries to send to attendees about drunk and drugged driving.

“First, we want to raise awareness of the devastating effects these kind of incidents have on the community” said Barrientos. “The issue of DUI arrest and crashes is a community wide issue and we need to address the problem together.”

The second message, says Barrientos, is responsibility. Being aware of how much you are drinking and knowing you cannot go onto the road.

“We all share these roadways together,” Barrientos said, “and it’s our responsibility to make sure our roads are safe for everyone.”

The third and final message Barrientos shared was supporting the victims. “By no fault of their own, these people and their whole lives have been changed. We are here to let these victims and their families know we stand with them.”

Michael Benge and his family were victims of a DUI crash. His wife was killed and he and his two daughters were hospitalized Memorial Day weekend in 2004, when a driver under the influence crashed into them at nearly 100 MPH.

“I always ask them [DUI drivers] if there was any shame in their actions, they always say yes.”

Driving under the influence and the impression it leaves on victims are life changing, says Benge, which is why he and other volunteers at the Walk Like MADD and MADD Dash in Bakersfield will continue to combat DUI crashes, to build a future world without loss of life from drunk and drugged driving.