Recalling BC choir of ‘65 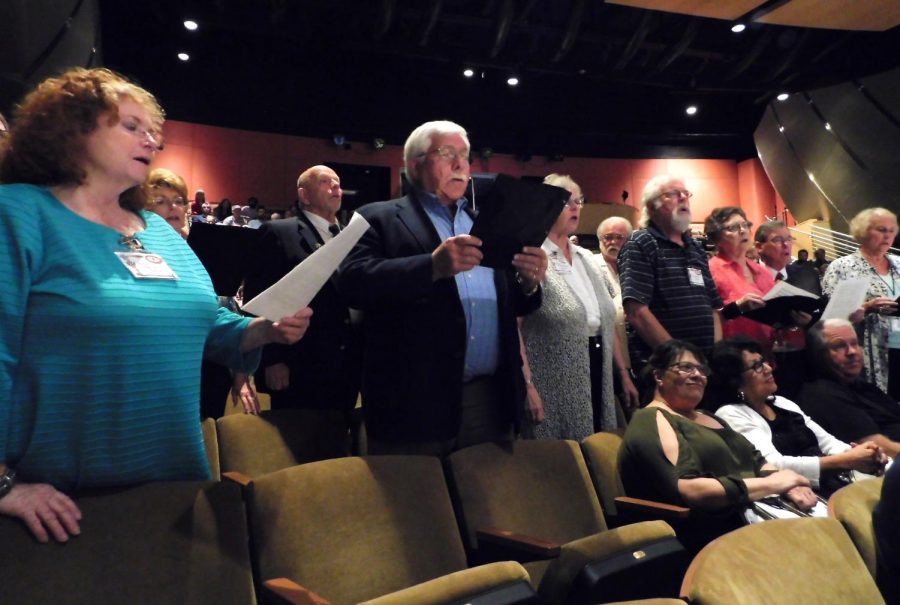 The 1965 BC Choir sings the song “The Lord Bless You Keep You,” to the audience.

Members of the 1965 Bakersfield College Choir joined together to watch their documentary “One Heart, One Voice” which was produced by Fabian Productions and edited by Jeff Anderson on Oct. 8.

The documentary unraveled the story of how the choir got the chance to go on a European trip and become the first American choral group to have won an award called “Llangollen International Musical Eisteddfod.”

In the documentary, the choir members mention that it didn’t matter what kind of background the person had, it was the music that connected them.

Most of the 1965 BC Choir alumni thought that the director, Joe Huszti, was a very strict conductor; however, it was in the best interests of the choir to keep them on their toes.

The alumni said they went to every service club. They sold records of their music and advertised as much as they could. They did as many fundraising events as they could possibly do, just to go on a trip to Europe. They accomplished that goal in a time span of two years.

The choir was put into three categories. One of them was the mixed choir. They felt like everything was leading up to that point: their hard work, dedication, commitment, etc. was going to pay off at that moment. Huszti mentioned that they were the second group that sang in the competition. All of them stated that they strived to make the music perfect.

When leading up to the performance, they sensed that they made magic in the room. It wasn’t 48 singers singing, it was all one voice coming together and feeling connected. The room was filled with silence building up to a loud applause and a standing ovation even though they still had two songs to go in their repertoire.

They felt like that moment was only for the 10,000 people listening in the audience and for them it was like they had transformed. The moment they won, they realized how far they came as a choir. Some mentioned that they were treated like royalty.

From Europe, they were invited to Washington D.C. to sing for Lyndon B. Johnson, who was president at the time. Johnson mentions in a clip in the documentary that he was proud of the choir for representing America in the competition.

Fast forward to 2015, they had their 50-year reunion and they were aware that the magic was still there just like it was in 1965.

At the end of the documentary, many of Huszti students thanked him for bringing them together like one big family. They ended the premier with a song called “The Lord Bless You and Keep You” and singing it to the audience.