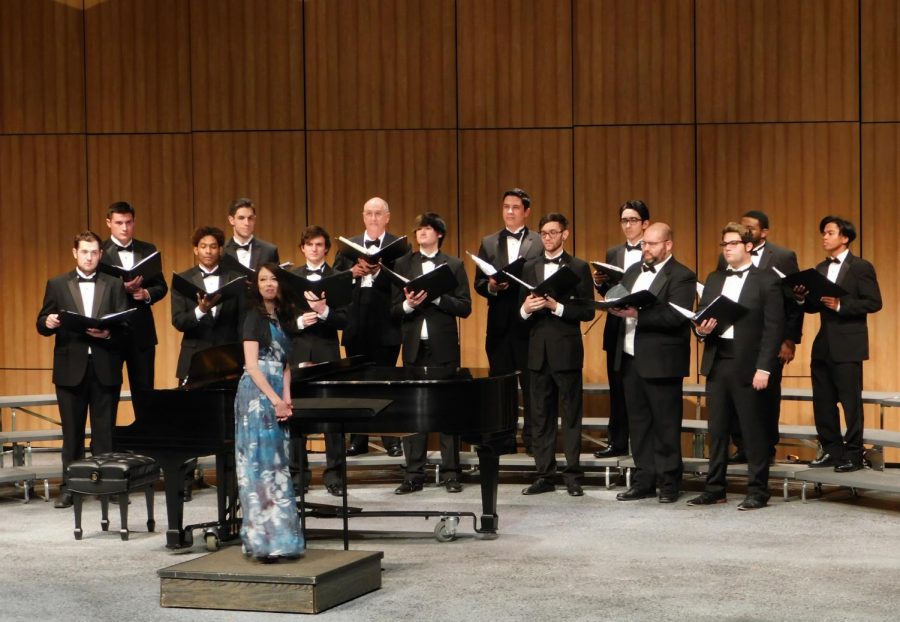 The men of the BC Chamber singers get ready to sing.

The Bakersfield College Chamber Festival is where the sound of music came alive on Oct. 23. in the Edward Simonsen Performing Arts Center. There was 12 high schools, plus the BC Chamber Singers being evaluated by Dr. David Dickau, who is a conductor and composer from Minnesota State University.

Each choir had a mini clinic, where Dr. Dickau would work with the choir to fix any problems such as intonation, tone, diction, etc. He would make the choir use motions like spinning their finger to get to the right pitch, or by having them walk around the piano to feel the rhythm of the music and beat.

“It’s a Chamber festival where there’s a lot of chamber groups, which are high level singing groups, from different high schools from Bakersfield that are coming and we all get to show off our stuff and get judged by a guest conductor,” said Neiman McDuff, who is a part of the BC Chamber Singers.

Angela Caffee, who is also a part of the BC Chambers, mentioned that she was more excited about singing in front of the high schools because in a way it was like recruiting people to see their concert and for them to sing for the choir.

Some of the songs that the BC Chamber Singers performed for the high schools were “Alleluia” by Jake Runestad, “Twa Tanbou” by Sydney Guillaume, and “Nachtwache II, Opus 104, No. 2” by Johannes Brahms.