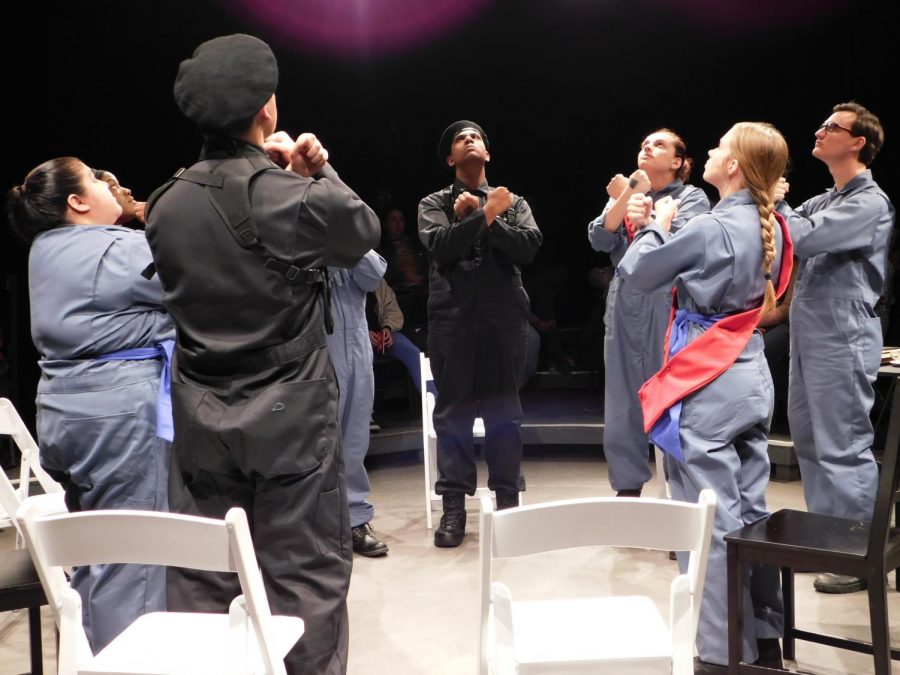 The theatrical performance of George Orwell’s “1984” took place in The Black Box Theatre at Bakersfield College on Nov. 17.

The play based on English author George Orwell’s “1984” novel that was published in 1949.

The reenactment by Bakersfield College students occurred for over two hours. Doors opened at 7 p.m. and audience members seated themselves. As the audience waited for the 7:30 p.m. show, there were four TV screens hanging from the middle of the room displaying a phrase that would later be heard numerous of times from the Inner Party.

“Ignorance Is Strength. War Is Peace. Freedom Is Slavery.”

The story takes place in Oceania, a totalitarian state, where it is split into three classes: the Inner Party, Outer party, and the Proles.

The Inner Party is privileged. Their living conditions are significantly better than the other classes. They are groomed at a young age and are selected for leadership. In return, they are treated luxuriously in comparison to the others. Comrade O’Brien (Chris Nisbett) had a villainous mannerism towards anyone who went against Big Brother (Brian Purcell).

In Oceania, everything is monitored, there is government surveillance always watching. The purpose for this is to minimize “thought crime” which is thinking against Big Brother. Comrade Syme (Issac Satawake) who works in The Ministry of Truth, translates everything to newspeak, whereas old speak is not allowed in Oceania. Words are destroyed to destroy thoughts.

To ensure residents of Oceania do not have second thoughts about Big Brother, they have a “2-minute hate” every morning.

During the performance, comrades shouted “Swine” and ‘Liar” at the TV screen of a video of Goldstein. In the video Goldstein says, “Down with Big Brother,” and comrades reply with “Down with Goldstein.”

Emmanuel Goldstein and Big Brother are never shown in person; however, Goldstein leads those who are against Big Brother.

Comrade Winston Smith (Andrew Beard) and Comrade Julia (Carlie Wood) are young lovers, who are a part of the Outer Party. Julia was the first to have doubts about Big Brother, then Smith started to as well. Smith and Julia began to question what life was like before Big Brother.

Julia and Smith decide to wed, and stay with Landlady (Joy Wheat) but are shocked when the Landlady turns them in to O’Brien. They confess to him that they stand against Big Brother.

Their confession lands Smith in Room 101. This is where Smith is starved, deprived of sleep, and is seen looking defeated. Smith is even tortured with rats by O’Brien. He has a breakdown when O’Brien denies that “2+2=4.”  Smith is seen throwing blocks given to him to make “2+2=5” and is in tears. His emotional breakdown leads him to eventually crack, and he says “2+2=5.” He even expressed how much he loves Big Brother.

In the last scene Smith, Parsons (Nicole Nieto), and Julia are seen at the Chesnutt Café. Smith, especially is pleased to hear the good news, Big Brother has won the war for them. Everyone was joyful.

Andrew Beard who was in two previous productions at BC, mentioned that he and Winston Smith were very alike. He did not find it hard to get into character because of this very reason.

“It didn’t take that much work to have an emotional breakdown in front of others because I could relate to the character and feel the fear and frustration that I allowed it all to just come out,” Beard said.

He also included that he could feel the injustice that was happening to Smith and it is what resonated with him the most.

Performances for “1984” ran from Nov. 15-18 and was directed by theater professor Kimberly Chin.