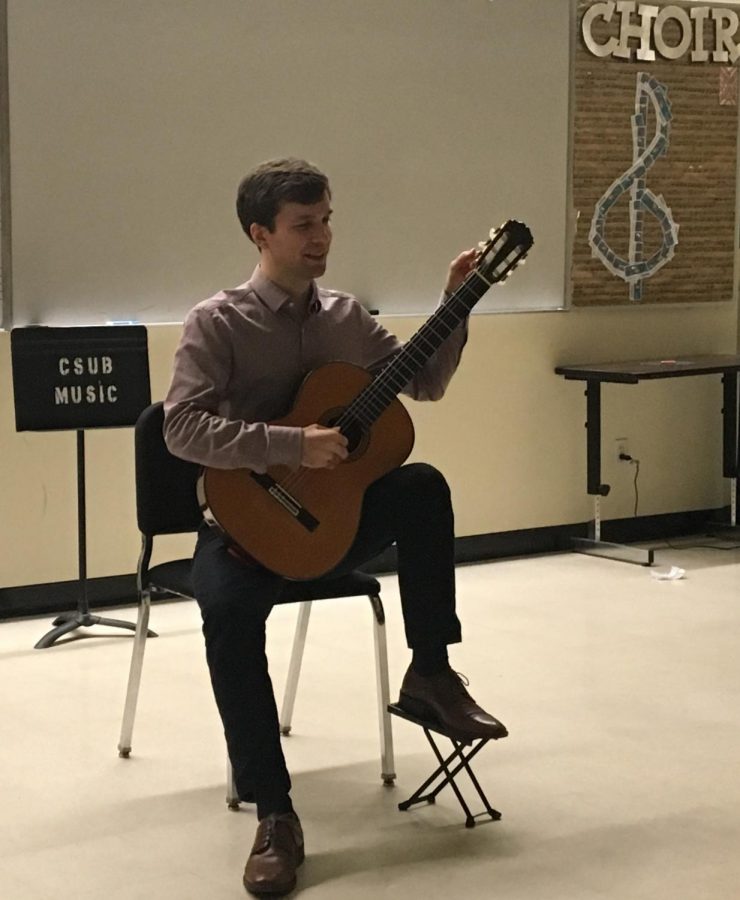 On Feb. 15 California State Bakersfield Music and Theatre Department welcomed former professor Dr. Cameron O’Connor as he shared his love for music through his guitar performance.

O’Connor is now the music professor at Oregon University

He opened up about how he had writer’s block during his high school years, but as soon as he entered college, his level of confidence rose up, and he was able to write.

As he began his performance, he kicked things off with his personal favorite, “Prelude from E Lute Suite BMV 1006A” by Johann Sebastian Bach. The audience reacted positive to the piece because of how soothing the melody was.

He continued with his next set, two scenes from the opera “Lohengrin” “Elsa and Ortrud Duet” and “Elsa’s Procession to the Cathedral” by Richard Wagner. The story took place in Germany during the 10th century in the middle of a wedding ceremony. With combinations of slow and steady beats, O’Connor brought the performance to life through his music.

His next set he dedicated to the famous Mario Castelnuovo-Tedesco who wrote the music for the play “Rondo, op. 129” “Tonadilla on ‘Segovia’ and “Tarantella.” He mentioned how Tedesco was a Jewish man who fled Florence to come to the United States. He also shared that this upcoming summer it will be the 50-year anniversary of Tedesco’s death. He expressed how honored he was to have met his grandson a few years back.

O’Connor brought a few songs of his own. He explained how he likes to write in his free time. They were a combination of three songs that are from “The Northwestern Scenes,” “Fall in Corvallis,” “Rain in the Old Growth Forrest,” and “Winter Sun Again.” He then continues to express how these songs remind him of home, Los Angeles. He shared how a big inspiration for these songs were thanks to nature.

He ended his performance with “Vals de la Primavera Maxixe” by Agustin Barrios. He found it funny how Barrios wrote these songs in a Brazilian form/wording in order to please Brazilian people.

Jim Scully, the host of the event and a music teacher at CSUB, shared how amazing of a teacher O’Connor is.

“Students are very lucky to have him as a professor and it was pleasure to have worked with him in the past,” he said.