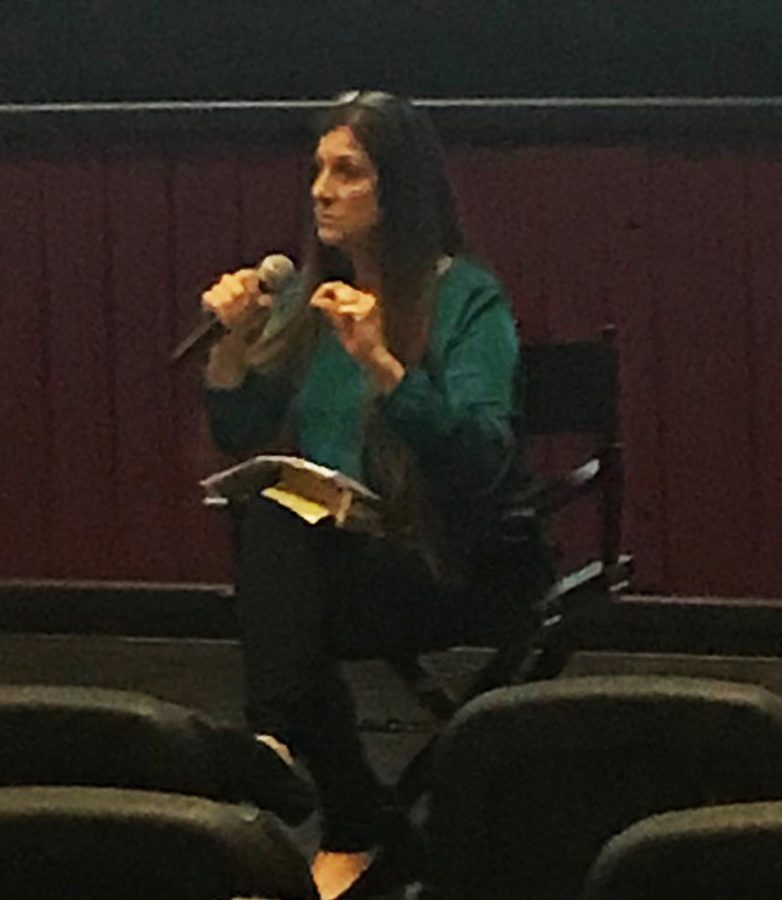 Dawn Schiller human survivor of Human Trafficking, speaks to a packed auditorium at the Maya Cinemas on Jan. 29.

Community members filed in Bakersfield’s own Maya theatre on Jan. 29 to hear Dawn Schiller, a human trafficking survivor, share her story.  The theater was crowded with people from varying fields: education, healthcare, law enforcement, social services, and community members. Schiller opened the night by reading excerpts from her memoir as she showed clips from the 2003 “Wonderland” movie, and clips from the 2013 ID television special that recounted Schillers story. Schiller went on to reflect on the events that led her to write her memoir, “The Road Through Wonderland: Surviving John Holmes”

“After watching the 2003 film Wonderland, it brought me great distress…and that was when I realized I had to write my own story in my own words, because other people weren’t doing it.” She spoke of a troubled childhood, rife with abuse; an absent father, an indignant mother, and an uncle who subjected her to sexual abuse.

“That was my normalcy… and even though things hurt and scare you it’s your bond… you don’t have a choice,” Schiller said.  “That is what led me; a 15 year old teen lost to the world, to be preyed on by a man 15 years my senior.”

For the next six years, her life was not her own as she was subjugated: to forced prostitution, endured physical and verbal abuse, and was being sold for sex in the Drug world.
Schiller is aware just how susceptible young children and teens are likely to fall into the hands of seasoned predators and traffickers. She gave insight to the inner workings of how a predator marks their victim and how her predator,  John Holmes pegged her instantly, “they find a hole in you that is needy… they see you’re homeless, accompanied by a parent who is a non-presence in your life, they  see you getting high… your available… let me check.”

Schiller seems to have traveled a perilous road in her life and is working hard to break the stigma of being a victim of human trafficking.