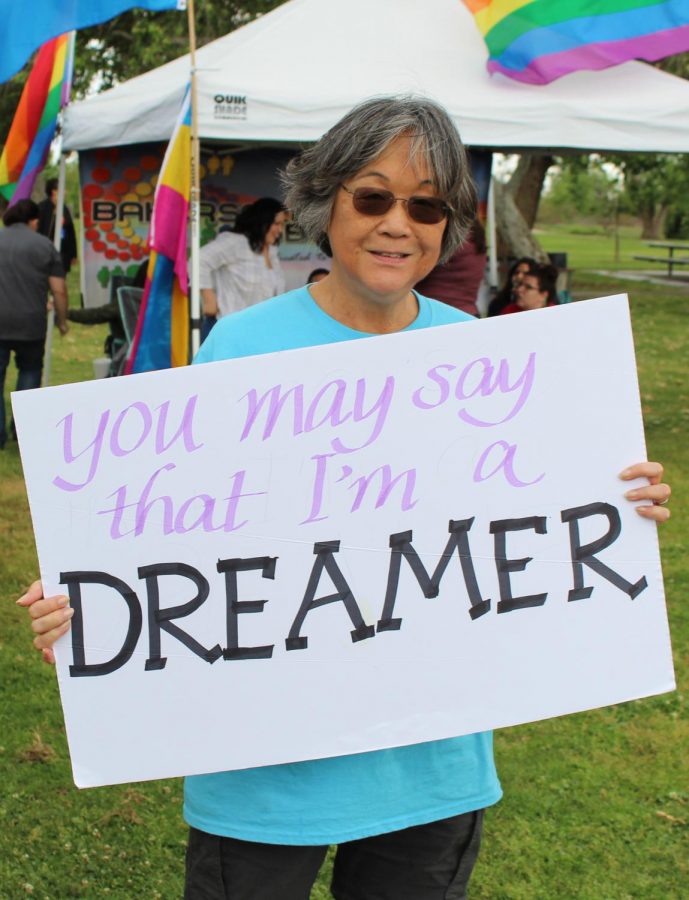 Sara Pettiford shows support at the rally commemorating MLK for the 50th anniversary of his death.

On April 7. the community of Bakersfield came together for a rally celebrating the life of Dr. Martin Luther King Jr. at Yokuts Park. As well as commemorating the 50th anniversary of his death.

Although the weather was rainy and gloomy, the support from several people who came out kept the rally cheerful. There was music from a live band and food vendors such as Uncles BBQ and The New Spirit of Burgers. As well as informational booths from different organizations such as The Bakersfield LGBTQ group, Dolores Huerta Foundation, Planned Parenthood, CAPK: Community Action Partnership of Kern Energy Program, Gay and Lesbian Center of Bakersfield, Faith in Kern, and St. Paul’s Episcopal Church.

The emcee of the event was Danny Morrison the on-air personality for Bakersfield’s New 103.9 The Beat. The speakers from some of the organizations spoke about Dr. Martin Luther King Jr.’s organizing and how it helped shape our community today.

Camila Chavez from the Dolores Huerta Foundation dedicated her speech to today’s youth and their current activism to make a change in our country.

“The civil rights gain of our country must always be defended. I have faith that fifty years from now, my children will speak of the brave actions of today’s youth who are taking the necessary actions to make all of our lives safer. They will speak of historic legislation to cure the epidemic gun violence currently plaguing our country. Just like Dr. King, I have a dream that my children will also give homage to the Black Lives Matter and the Me Too movement to make their lives safer,” she shared.

Jerry Pettiford who helped organize the MLK rally felt the event was needed to spread positivity and commemorate the life of Dr. Martin Luther King Jr.

“There’s been so much political negativity and division that the purpose of this is to say this is what has happened over the last fifty years, we don’t have to revisit those years to appreciate what we have today,” said Pettiford. “If we look at one day at a time the world looks pretty bleak, but if we look at it over the last fifty years things have gotten better for all people of color and that’s something positive.”