Looking at black holes with the GOTO Chronos at BC planetarium 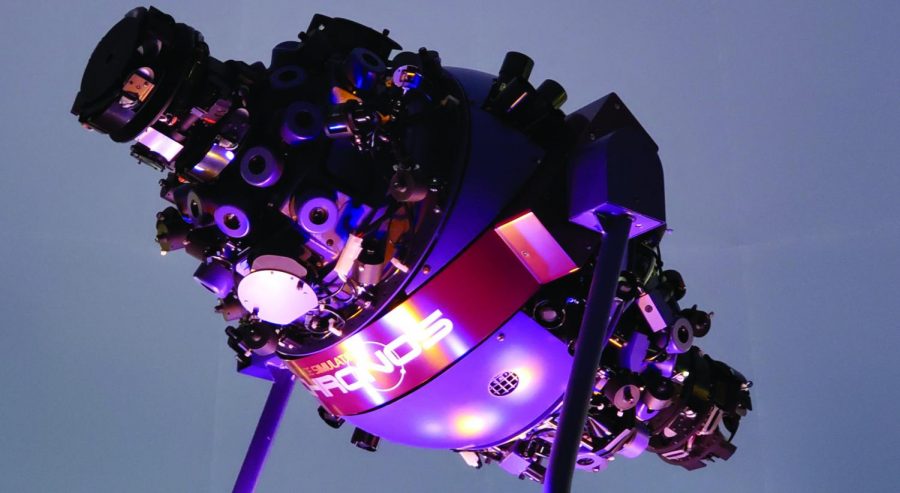 The GOTO Chronos star projector provides the introduction to “Black Holes: The Other Side of Infinity” at the William M. Thomas Planetarium on March 21.

“Black Holes: The Other Side of Infinity” was featured at the William M. Thomas Planetarium March 21.

This show was the second of five shows scheduled for this semester.

The show began with a brief introduction to the planetarium by Astronomy Professor and Planetarium Director Nick Strobel.

Strobel explained the equipment the planetarium houses and how it functions.

A GOTO Chronos star projector sits in the center of the room underneath the massive domed ceiling.

The star projector has the ability to display many of the stars in the known universe.

BC is home to the largest planetarium in the Central Valley.

The show started by Strobel taking a tour of the night sky that is visible from BC.

Ursa Major, Orion, and Perseus were just a few of the many constellations above BC.

In fact, there are at least 40 known constellations visible in Kern county according to Strobel.

Moving on to the main feature of the evening, the projectors switched to the Spitz SciDome video system.

This allows for many different planetariums shows to be projected onto the 36-foot dome above.

“Black Holes: The Other Side of Infinity” gives viewers insight into the power black holes have over the universe as we know it.

The visuals in the show are digital renderings of actual data collected from various studies into black holes.

These digital renderings give the most accurate depiction of black holes and how they manipulate the space and matter around them.

“Black holes create a puncture in the fabric of space-time,” Strobel explained.

The feature also gave a view of the inside of the supermassive black hole nested in the center of our Milky Way Galaxy.

The William M. Thomas Planetarium will be hosting a series of these shows every semester.

The next one is on March 28, and viewers are encouraged to show up on time as there are no late admissions.

Tickets can be purchased from the Bakersfield College Ticket Office or online.

People of all ages are encouraged to attend and learn about our vast universe.