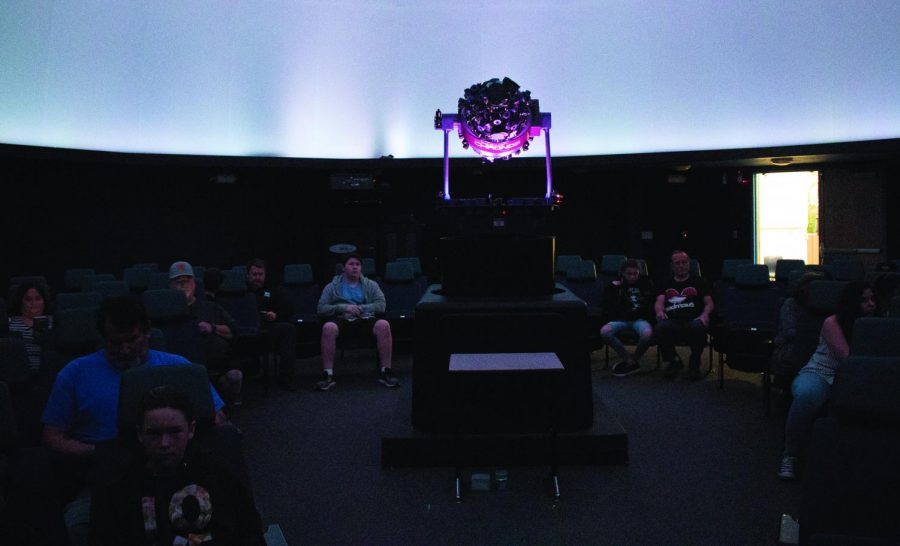 Viewers gather for the screening of “Dawn of the Space Age,” at the William M. Thomas Planetarium on March 28.

“Dawn of the Space Age” took place in the William M Thomas Planetarium at Bakersfield College on March. 28.

It was dedicated to the 50th anniversary of the first manned mission to the surface of the moon, Apollo 11.

Stargazers and Apollo 11 fans alike attended the event and were presented with a tour of the evening sky from the northern, southern, eastern and western directions with the help of Assistant Director of the Planetarium Physical Science Department at BC John Menzies and the planetarium’s Goto Chronos star projector.

Throughout the tour of the night sky, stargazers were introduced to and shown how to recognize certain star constellations.

The constellationa are certain groups of stars that formed imaginary outlines or patterns in the star sky which usually represent things such as creatures, mythological people or random objects.

Menzies explained to everyone that if they were having a hard time seeing faint stars to use a skill that he said “was a used and passed on technique amongst astronomers for centuries.”

Menzies said to use our averted vision which was the technique for viewing faint objects by using the peripheral vision and looking slightly to the side all while concentrating on the object.

The show came to a close by presenting onlookers with a screening of the animated film “Dawn of the Space Age” which viewers got to watch on the Planetarium’s Spitz SciDome.

The animated film documented the first fifty years of space exploration, from the launch of the first artificial satellite Sputnik, to the lunar landings and private operated space flights.

Throughout the film viewers got to see the race for space and eventually the moon, between the United States and its competitors and the first successful space explorers of the Soviet Union.

Everyone was brought on a historical animated reenactment on humanity’s first steps into space.

Stargazers got an inside look into the many successes and failures it took to get to space and eventually to the moon.

The next show, “Future of Space Exploration” is going to be held on April 25 and tickets can be purchased from the BC Ticket Office.