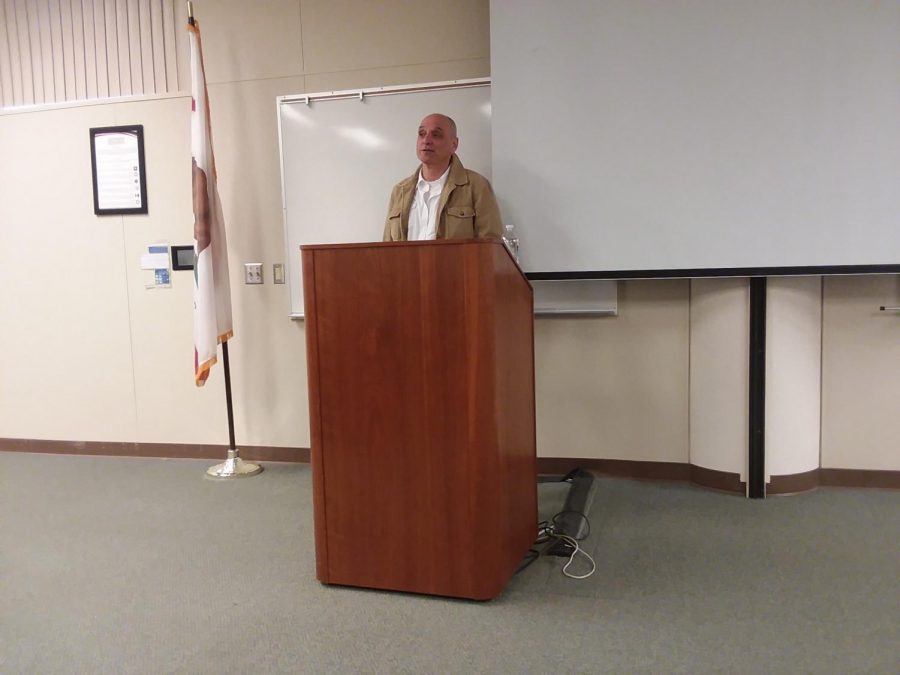 Eric Schlosser informs the audience on the huge issues of fast food and nuclear weapons in the Levan Center on April 4.

Schlosser spoke on his motives behind writing the novels and why he informs the public on the dangers of fast food and nuclear weapons.

“Both books are about things that were deliberately hidden from us…. They’re both subjects that are important but I feel like the mainstream media hadn’t done its job in either case in really looking at these subjects and how they could affect every one of us,” Schlosser said.

After reviewing what he was going to speak about, he went on to elaborate on the award-winning “Fast Food Nation” book.

Schlosser discussed when and how the fast food industry started.

According to Schlosser, McDonald’s founder Ray Kroc created a “factory system” at each McDonald’s so food would taste exact at every McDonald’s restaurant.

Schlosser talked about how in every fast food hamburger, there are about two thousand different animals ground up in it.

“Once I started to learn how this industry had taken our food and applied technology to it and completely changed it, I felt like I really needed to write about it,” Schlosser said.

“This industry was able to change our food system without telling us and in many ways, changed the American diet.”

Schlosser moved on to the topic of nuclear weapons which is what his book “Command and Control” is about.

“Nuclear weapons are the most powerful weapons ever built on this earth,” Schlosser said.

“Right now, if there were a nuclear war between the United States and Russia, it would take about five minutes for us to launch our missiles. It would take 15 to 30 minutes for our missiles to reach Russia and within three hours there would be one to two billion people killed,” Schlosser informed.

“So, what we’ve done with technology has vastly increased the potential for catastrophe.”

According to Schlosser, the people who created nuclear weapons only wanted World War II to end because it was the bloodiest war of all time.

“I wrote the book just to remind everyone that these weapons are out there…. There are about fifteen thousand nuclear weapons out there and they’re the greatest threat that we face,” Schlosser said.

Schlosser provided a brief explanation as to how easily the nuclear weapons could be hacked at any time.

“If I thought there was no hope and there was no chance at changing any of this…. then I wouldn’t be writing about all these problems but I believe that once people know about these things, they could do something about it.”