The Mentalist returns to BC 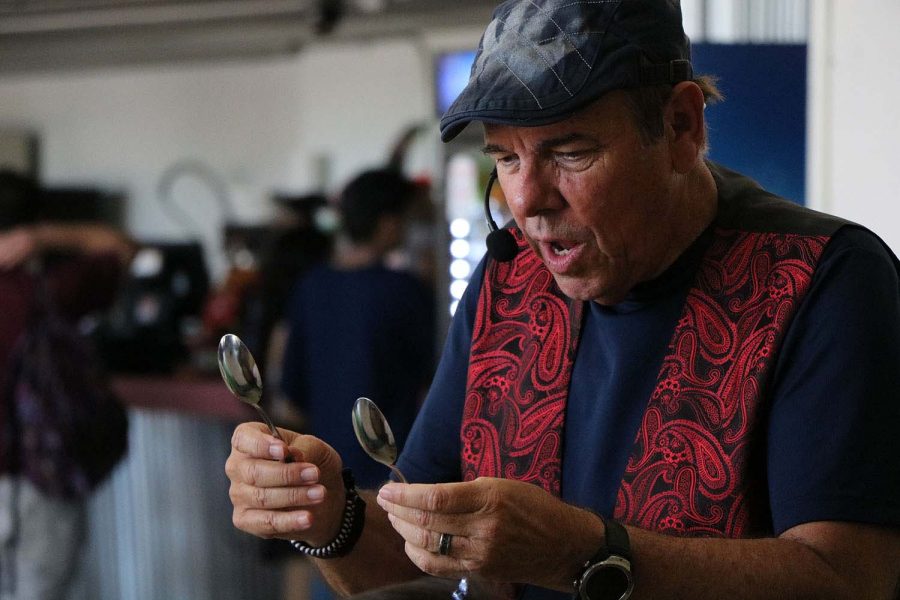 Richard Aimes shows the spoons he is going to bend with his mind during the mentalist show at Bakersfield College.

The fall semester has just begun and students’ minds are being read. BC students were treated to a popular mentalist show on Aug. 28 in the BC cafeteria.

The Mentalist, Richard Aimes, and his wife, Marielle Aimes, from Las Vegas, performed his Mentalist show while hungry students sat at tables and waited in line for their lunches.

He began the show with an introduction and picked someone from the audience to read his mind. They had to determine what number was on a page and each successfully guessed correctly.

During his next trick, Trevor Kelley, a BC student, was given a yellow balloon with a piece of paper inside. Aimes asked two people from the audience one to choose a page from one of two books and the other to go to that page in the other book.

The phrase ‘black stitches’ was read from the first sentence in the book and matched the piece of paper inside the balloon. The next trick performed by a volunteer from the audience, a movie buff, was a piece of paper ripped from a notebook with a movie title written on it. Aimes successfully picked the right movie title.

A crowd favorite was the spoon bending, using energy and heat, which he successfully accomplished. Aimes then gave the spoon away as a souvenir to a member of the audience.