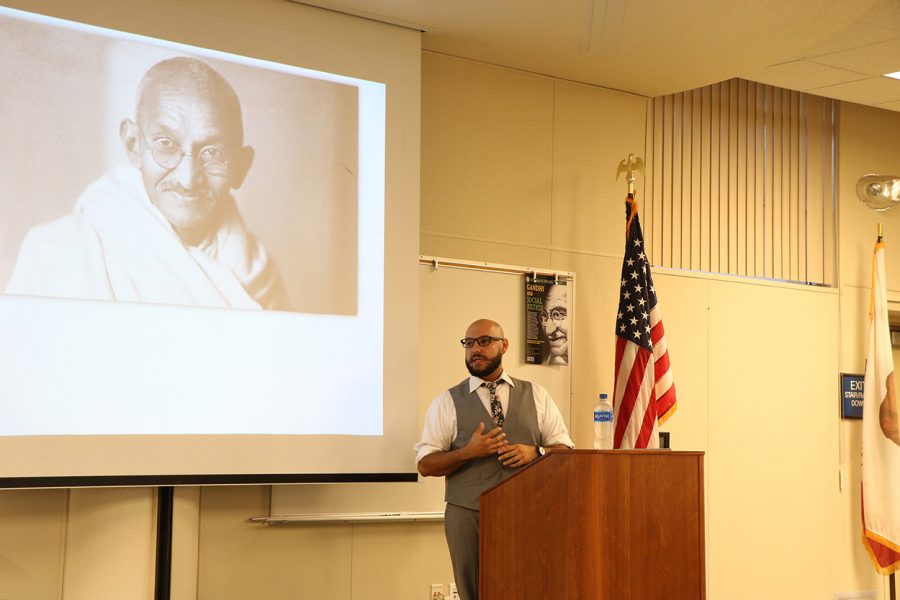 Jeff Newby speaking about Gandhi’s life and upbringing in the Levan Center, Sept. 23.

In celebration of Gandhi’s 150th birthday, Bakersfield College hosted a panel discussion to commemorate the legacy that was inspired by the actions of Gandhi with social justice on Sept. 23 in the Levan Center.

This was one of the events in the ongoing series of activities to honor of Gandhi.

All shared different thoughts and ideas of how the influence of Gandhi’s teachings has shaped the world.

Newby started the panel by overviewing the life of Gandhi. Religion heavily shaped the person Gandhi was, coming from parents of differing religious backgrounds, he grew fascinated and open to religious pluralism. Gandhi was influenced primarily by Jainism and Buddhism, along with an upbringing of Hinduism.

As result of how Gandhi lived by the belief of doing the right things in life, he paved the way of nonviolence activism.

Twitter has made social justice movements more accessible for participation.

Most activists are thought of as powerful leaders that have possessed a charismatic presence.

With modern day times, people are activists behind a screen, sharing opinions through hashtags in a nonviolent manor.

Nurses have advocated for their patients’ health and the challenges faced. In less populated areas, food deserts are more common than not.

“When we talk about a food desert, we are talking about where is your closest grocery store, full-service grocery store,” Johnson said.

Advocating for people who are not in the position to do so themselves is driven from Gandhi’s selfless nature. His ideals and focus inspired people such as Delores Huerta and Cesar Chavez.

Garza talked about the embodiment these two activists showed as powerful, charismatic leaders.

They were heroes to many while facing personal challenges behind the scene, Huerta passed laws for protection while lugging her children with her to the court houses.

As times began to change and social justice was being fought for, the artwork reflected the social climate. Graffiti arose as an outlet to express the opinions people had, and the industry shifted into inclusivity.

“The spirit behind street art and graffiti really do stem from a lot of the same ideas around social justice,” Wrest said.