BC to present “12 Angry Jurors” 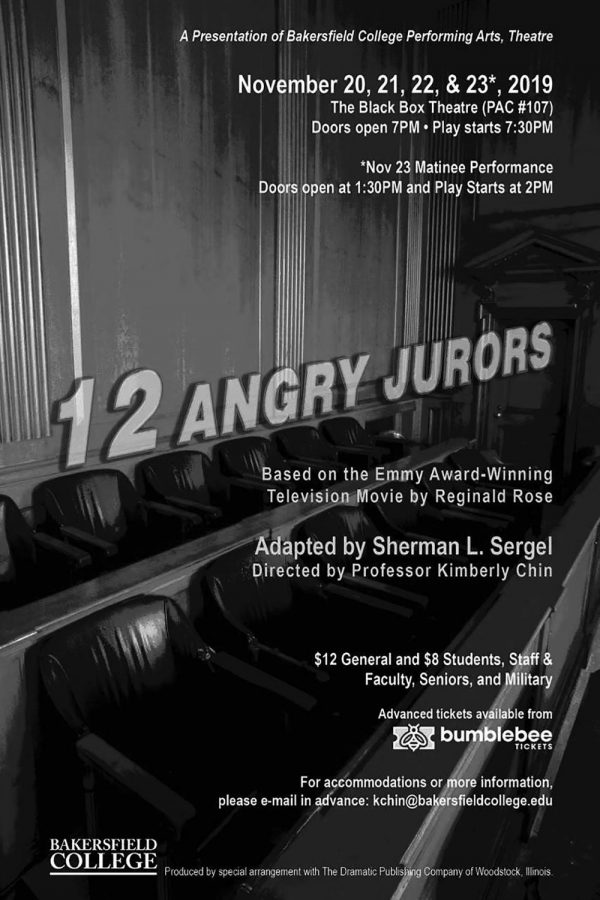 There are 12 people sitting at a long table in a jury room. They are discussing the fate of a teen who is being charged as an adult for allegedly murdering his father. They must decide unanimously whether he is innocent or guilty. If found guilty, he will be put to death. If found innocent, he is free to go. If they can’t come to a decision unanimously, they are a hung jury and a new jury will be chosen to decide his fate. This is the story that the Bakersfield College Theater Arts department will convey in director Kimberly Chin’s production of “12 Angry Jurors.”

The play is being presented in PAC 107, also known as the Black Box, through Nov. 23.

The layout of the stage is in an alleyway setup, meaning that it is long and narrow with the audience on all sides of the cast during the play.

“None of the cast members have ever been in an alleyway production setup,” Chin said.

She explained that she has been working with the cast to move in such a way that they don’t stack with each other and block the audience’s view of each character.

Both Jovani Morales, who is playing Juror 5, and Vanessa Beltran, who is playing Juror 4, said that picking up on each other’s cues has been challenging due to the setup. They have to play their parts and angle to be seen and heard by everyone in the room, not just fellow actors, but the audience as well.

This production is a rendition of writer Reginald Rose’s famous teleplay “12 Angry Men,” which has been adapted by Sherman L. Sergel. The original teleplay featured a cast of all white men, but in this production, Chin explained that there is a more diverse cast.

“There are lots of social and political messages being conveyed based on who was cast,” Chin said. “There is a racial divide in society, and it will be seen within the play.”

There will be lots of social commentary throughout the play according, to theater arts major Maria Vega. Vega will be playing Juror 10 in the production. She said the only challenge she faces in the play is identifying with her character.

“I pride myself in being Hispanic, so being racist against a boy who is also Hispanic hurts a bit,” Vega said. “Many people don’t realize that they can be racist toward their own race.”

This is a wake-up call, she added.

Theater doors will open at 7 p.m. each night, and 1:30 p.m. for the matinee performance. The cost of each ticket is $12 for general admission and $8 for BC students.