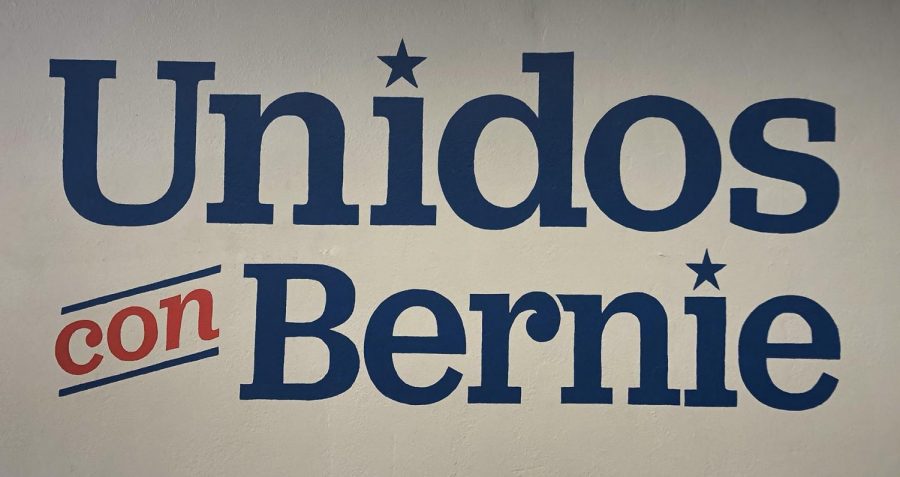 As of Jan. 29, Sanders leads all Democratic candidates in campaign contributions.

A campaign office for Sen. Bernie Sanders opened in downtown Bakersfield on Jan. 25, ahead of next month’s Iowa caucus.

Close to 100 people from all over Kern County stuffed into the small space to buy merchandise, donate to the campaign, meet with local campaign leaders and fellow supporters, learn where Sanders stands on the country’s issues, and most importantly, sign up to support the campaign by volunteering to canvass neighbors and man the phones to encourage non-party and registered democratic voters to pledge their vote to Sanders.

The event featured a line-up of speakers that included community leaders such as Delano Councilman Bryan Osorio, experienced and high-ranking campaign leaders and politically active youth. They led the crowd in chants, explained why Bernie is the answer to many of their concerns on various issues and encouraged everyone to volunteer so that he gets the votes he needs to win the presidency and represent them in the White House.

According to the campaign’s California deputy state director, and Bakersfield native, Shelli Jackson, “He can’t do it alone.”

According to two polls, Sanders is leading in campaign contributions among democratic candidates.

Because Kern County is largely conservative, democratic campaigns often overlook the area, but according to the emcee of the event, it needs to be paid attention to.

Bakersfield College student Gabriela Facio also addressed the crowd and revealed that she will canvass the Bakersfield College campus on behalf of her undocumented mother, who is the reason why she became involved with the campaign.

Facio said that she used to stand on the sidelines. This election, however, she will use her second language to her advantage to be a proactive part of change instead of watching it happen.

“I get a better reaction because I’m able to speak Spanish. We target a lot of Hispanic people. We have such a big population of people who don’t care, who don’t vote,” she said.

According to State Field director Jorrel Verella, there is a reason for the lack of political participation.

“A lot of people don’t vote because they’ve never been taught to,” he said.

Following everyone’s opening remarks, area field director Alex Ramos encouraged attendees to sign up to canvass neighborhoods in the hours following, or provide their personal information to get information on how to volunteer at a later time and date.

Bakersfield College student Elizabeth Bernasconi decided to devote her day to support the campaign by canvassing the neighborhoods.

She came to the event in hopes of meeting other BC students who like Sanders and not President Trump.

As a socialist democrat, she will vote for Sanders because he will “create the foundation for a place that I would be proud to raise my kids.”