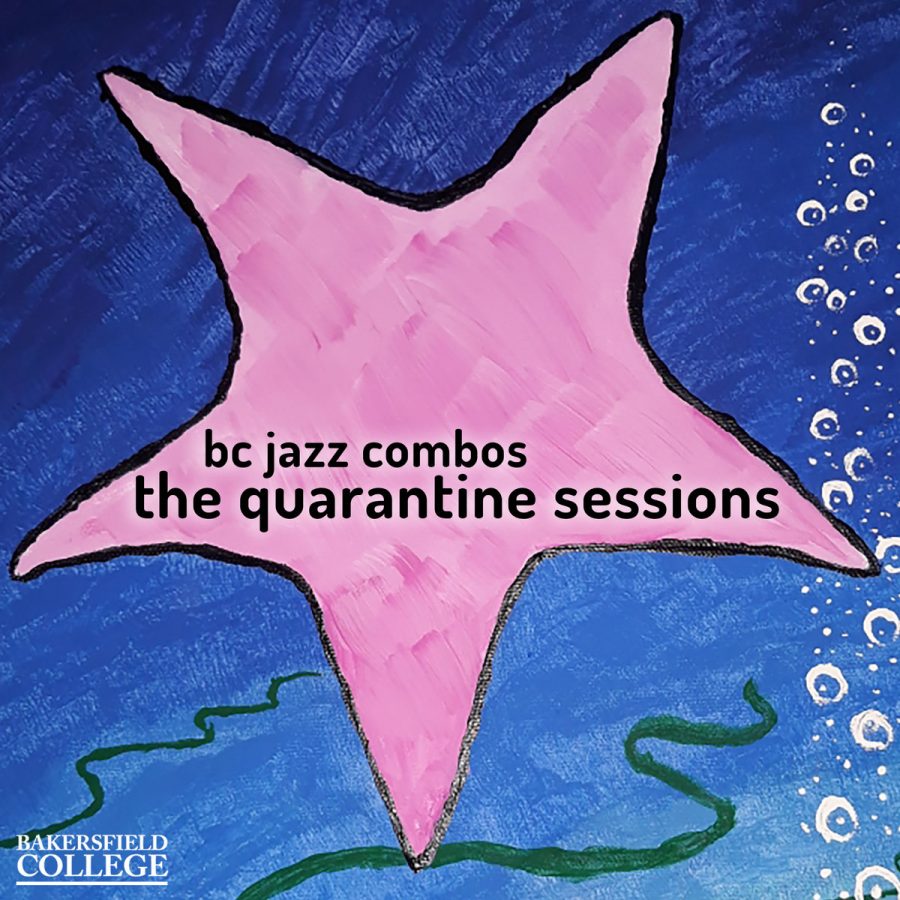 Created art cover for the album "The Quarantine Sessions," released on June 16, by BC Jazz Studies.

When the global pandemic became a stay-at-home order in California and Bakersfield College moved to online in March of the spring 2020 semester, Kris Tiner, the director of Jazz Studies at BC, had to completely reinvent the program for his students.
All of their scheduled concerts, including the annual Jazz Day Festival, were eventually canceled.
With eight weeks left of the semester, Tiner instead came up with the idea for the students to do digital collaborations and assigned “The Quarantine Sessions” project, which was released on June 16.
“The main thing I told them was to ‘Take all of your experiences that you’re going through and find a way to create art out of that. It doesn’t have to sound like jazz, or like the music we were practicing before. But just use what you have in front of you, whatever technology you can get a hold of and make something original,'” said Tiner.
Seventeen students created eight tracks for their final project and Tiner decided to turn their work into a digital album named “The Quarantine Sessions.”
“They went beyond what I was expecting for sure,” he said.
All proceeds from the album benefit the BC Jazz Studies program.
Although he realized that it was a difficult switching to online, Tiner believed they all surprised themselves, and the students should be proud of what they were able to do for this project creatively.
BC’s music major Abby Wilson, 20, shared that she and the class were disappointed when their Jazz concert events were canceled, but when Tiner gave them the project idea of the “The Quarantine Sessions” it all gave them hope.
“Putting music together was really fun. Mine was not really a structured piece. It’s [freer] so seeing what they can do with that opening ended concept was interesting because they came up with a lot of really cool things I haven’t envisioned originally,” Wilson said.
BC’s music major Marina Martinez, 25, said it was difficult at times because her hours at work increased, and she was taking care of her father who had home dialysis.
“I’m just happy all the proceeds are going to BC Jazz Studies since we had to cancel most of our performances and Jazz Day this [spring] semester. I think it was a win-win for everyone,” Martinez said.
Music major Izzy Foster, 20, added, “Music is such a social sport and suddenly having to find a way to do it online from our own homes was something that took a bit of getting used to. Overall, it was a really great way to end my time at BC and I couldn’t ask for a better professor than Tiner to guide me through the program- both before and during the quarantine.”
Multiple students asked Tiner if they can do more digital recording collaborations in future semesters.
“I think they were able to discover new ways to do things. We had to. We had no choice, but we found a new creative side of the class,” Tiner said.
The class used Zoom to chat and share ideas, Google Drive to share charts and files, cell phones, and any home recording technology.
Tiner shared this favorite part about this project was seeing the creativity come through and watching the students create art from real experiences and a deep place.
Tiner said that during the fall 2020 semester the BC Jazz Combos will meet as a hybrid class.